Latest News (28.07.2017) - MPSC Clerk Typist Pre Exam Result 2017 Declared -
The good news is that Maharashtra Public Service Commission has uploaded result of Preliminary examination of Clerk (English/Marathi) on today.
The written test was organized on 10th June 2017.
The roll number wise list of candidates has been uploaded. The district wise roll numbers has been provided now for all districts. 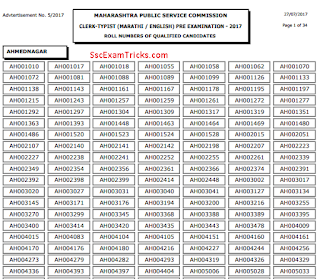 The cut off marks for each category is given as under -

Maharashtra Public Service Commission (MPSC) had invited Applications for MPSC EXAM 2017 provided on the official website and successfully completed the process of filling applications for the 408 vacant posts of Clerk/ typist (English/ Marathi). Written Examination is going to be held on 11th June 2017 at various centres in all over the state. A huge number of candidates had appeared in the exam conducted for the posts of stenographer and clerk.

From our resources, it is the latest news that MPSC is going to release result for the written test of MPSC EXAM 2017 which has conducted on 11th June 2017.
Those candidates who have applied for the post and waiting for Results can download their result on the direct link provided in the end of the post.