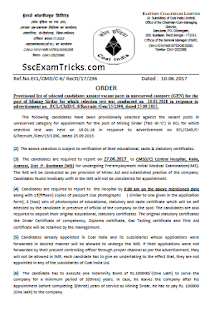 ECL Stenographer Exam 2015 Admit Card Released - Download ECL Stenographer Exam 2015  Call Letter - Check ECL Stenographer Exam 2015 Hall Tickets– easterncoal.gov.in
Eastern Coalfields Limited (ECL) had released notification for the posts of stenographer Grade I on the official website. ECL has also released list of eligible candidates and not eligible candidates for the written examination against the advertisement for the posts of Stenographer Grade I on the official website. ECL has sent admit cards by posts to all eligible candidates for the written examination which is going to be conducted on 21st March 2015 at two centres i.e. Asansol Engineering College, Kanyapur, Asansol, Dist : Burdwan, WB – 713305 and DAV Public School, Kanyapur, Asansol Dist-Burdhwan, WB-713305 for the posts of Stenographer Grade I. In case of non-receipt of call letter/Admit card, the concerned candidates should bring along with a sample call letter duly filled in, signed, pasted with a photograph and duly attested by a Gazetted Officer.
The format can be downloaded from the website. Read the instruction provided at the bottom of the admit card. Admit card is an entry card to appear in examination. It is a mandatory document valid with photo identity proof specially Voter Card ID, PAN Card ID.
Ration card and Adhar Card are not considered as photo identity proof to check the candidature of any candidate. Candidates are advised that they don’t forget to bring their admit card along with photo identity proof to the examination centres. It is also advised to the candidates that they will reach to the venue of examination 20-30 minutes before the examination time. Late coming candidates will also be not allowed to appear in the examination hall. Those candidates who had applied for these posts can download their admit cards from the direct link provided in the end of the posts.

The Final Selection of the candidates will be based on performance in written examination, skill test, viva-vice (interview) & medical examination fitness. The successful candidates of written examination have to undergo skill test. Candidates not qualifying in the skill test will be eliminated. Those candidates who will qualify the skill test will have to appear for the interview (viva-voce). After the interview the merit list will be prepared on the basis of marks secured in the written test and interview i.e aggregate of both marks. The successful candidates thereafter have to undergo Pre-Employment Initial Medical Examination (IME) for appointment as per company rules.
1st Stage-
ECL Exam will be conducted on 21st March 2015. The ECL Exam will be conducted by Pen MODE. There will be OMR sheet needed to be filled by Blue/Black ball point pen. The exam will consist of various sections English, Reasoning, Quantitative Aptitude, General Awareness and computer Intelligence. The exam will be a multiple choice question paper and four options will be provided out of which candidates need to choose one correct answer. The time duration will be of 2 hours or 120 minutes.
Recommended Books to qualify ECL Stenographer Exam 2015
Quantitative Aptitude by R. S. Aggrawal is mandatory requirement to qualify such tough exams in a very short duration of time. Here, Best books are recommended to the candidates who are genuine and willing to qualify the written examination with in minimum possible time. ENGLISH Tricks by Paramount , SSC Tier 1 ENGLISH by Arihant Special Addition exam oriented & Office Assistant Practice Book by Kiran books will definitely improve their ability and performance in solving Reasoning, English and quantitative aptitude.
2nd Stage - Computer Proficiency Test (CPT)
Three times more candidates are called for CPT to check the efficiency of the individual candidate by taking Computer Typing Test. The candidate will have to type a passage in English of 200 words within 5 minute (40 words/min or 1000 key depression for 200 words in 5 minutes) & 400 words passage for dictation in shorthand in 5 minutes means 80 words/min.

by Admin at 6/15/2017 07:00:00 PM
Email ThisBlogThis!Share to TwitterShare to FacebookShare to Pinterest
Tags ADMIT CARDS, SscExamTricks