Latest News on 11th June 2015: IOB Clerk 2015 selection List Declared-  Check IBPS Clerk CWE IV State wise Selection List for IOB here: Indian Overseas Bank (IOB) Selection List (State wise) has released on 11th June 2015 on official website based on the performance in IBPS Clerk CWE III held in December 2014 and interview was conducted in February 2015. The appointment letter of these provisionally selected candidates will be sent by post to their permanent address mentioned at the time of registration / apply online application form. It is declared by IOB that Bank will not be responsible for NON-RECEIPT of appointment letter of the candidates. Only those candidates who have been issued official appointment orders will be considered for appointment. Those candidates who are waiting for Bank selection list / Bank Allotment List, they can download state wise list which is given roll number and name wise from direct link given below.
1.First Allotment Notification (26 kb)

Bank of India has released list of provisionally selected candidates with their medical zone on 04th June 2015 on official website www.bankofindia.co.in for the post of Probationary officer (PO). These candidates have to report for pre-recruitment formalities at these given medical zone. BOB has also released list of documents on official website which will be produced during these formalities. BOB has released list of 1978 candidates who has selected for Joining formalities i.e. document verification or other formalities based on the performance / cut off marks obtained in IBPS PO IV which was held in 2014. BOB had also released a list of 107 candidates whose candidates are kept in pending and they are required to submit their document for their eligibility for this post. Those candidates who had qualified IBPS PO IV 2014 and waiting for allotment / joining, they can download List of selected candidates with BOB Joining Formalities for Probationary Officer from the direct link provided below.
Download BOB PO 2015 selection List in PDF
Check BOB PO 2015 Joining formalities here 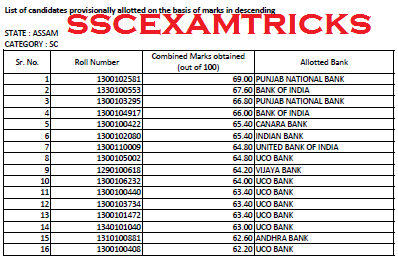 The latest News is that IBPS has released the final allotment list for the post of Clerk on 16th April 2015 on official website The final allotment of station will be provided to the candidates based on their Merit List which will be prepared descending wise from the final marks obtained by the candidates. The candidates will fall in the choice of the candidates through the merit list which was filled during apply for these posts. The candidates are required to produce / submit the photocopies of the documents at the time of getting appointment letter. Earlier Institute of Banking Personal Selection (IBPS) is going to release Final Result / Interview Result which has released on 01st April 2015 for the posts of Clerk based on the performance in written examination and personal interview conducted by IBPS. The Final Appointment/ Joining Date/ Seat Allotment of finally selected candidates will be done in the month of April 2015. IBPS has also released state wise allotment list of finally selected candidates on official website.
Check IBPS CWE III 2014 PO SO Clerk Reserve List Allotment

Download Final Allotment for Post of IBPS Clerk 2014
Earlier IBPS had released notification advertised for the posts of clerk in which online application was invited from 12th August 2014 to 01st September 2014 on the official website. Approx. 40 lakhs numbers of candidates had applied for these posts. The IBPS Clerk CWE IV which was held on 6th, 7th, 13th, 14th, 20th, 21st, 27th December 2014 at various centres in all over the country. Lakhs of Candidates had appeared in written examination and qualified for interview session which was conducted on 9th February 2015 to 19th February 2015. IBPS had released scorecard for the qualified candidates of Qualified Candidates called for Interview for Common Recruitment Process for CWE Clerks-IV on 09th March 2015 on the official website. Those candidates who had appeared in interview and waiting for the Final Result; they can download their Final result from the direct link provided in the end of the posts.

IBPS Clerk CWE IV 2014 Final Result Interview Result Merit List Appointment Letter Joining Date Details
·         Name of Exam: IBPS CWE IV CLERK Exam 2014
·         Name of the Posts - Clerk
·         Date of Exam- 6th, 7th, 13th, 14th, 20th, 21st 27th December 2014
·         Result Status – Released
·         Interview Date – 9th February to 19th February 2015
·         Interview Result – Released on 01st April 2015
·         Next Stage – Appointment Letter/ Joining Date
·         Appointment / Seat Allotment of Candidates – May 2015
·         Joining Date – Will be mentioned in Appointment Letter
·         Official Website: www.ibps.in
HOW TO DOWNLOAD INTERVIEW RESULT/FINAL RESULT
·         Click on the direct link provided below.
·         The Final Result will be displayed on the screen.
·         Click on the link say save as pdf or print the Final Result.
·         Save and print Final Result Hard Copy for the Interview requirements.
About IBPS CWE IV CLERK Exam 2014
IBPS CLERK Exam was conducted on 6th, 7th, 13th, 14th, 20th, 21st 27th December 2014. The IBPS CLERK Exam was conducted by ONLINE MODE. The exam was entertained through filling of circles on Computer Generated Page (OMR sheet) containing answers by clicking by mouse on it. There was no OMR sheet needed to be filled by Blue/Black ball point pen. The exam consists of various sections English, Reasoning, Quantitative Aptitude, General Awareness and computer Intelligence. The exam was a multiple choice question paper of 200 questions of 200 marks and five options were provided out of which candidates need to choose one correct answer. The time duration was of 2 hours or 120 minutes. For more information candidate must download syllabus and exam pattern of IBPS CLERK exam from the official website.
Final Stage – Interview Stage
The qualified candidates of IBPS CWE IV Exam 2014-15 will be called for 2nd stage which is interview stage. Three times more than required candidates are called for Interview Round. Document verification will be done before Interview.
The Final Selection will be done on the basis of performance in the interview of the candidate. The interview will be conducted of 100 marks. The minimum qualifying marks will be 40% for General Candidate and 35% for SC/ST/OBC candidates.
A Final Merit List of Finally Selected Candidates based up on the performance in interview and written exam marks will be released on the official website of IBPS.
Final Stage – Appointment Letter/ Joining Date
The Final Allotment will be provided in the month of April 2015.
The Finally Selected Candidates for these posts should bring and deposit the list of document which is provided below at the time of receiving appointment letter from the authority.
The appointment Letter will contain the date of joining and reporting time along with venue of appointment. The candidate will have to report at the venue mentioned in the appointment letter on the fixed date.
List of Document to be needed at the time of getting appointment letter
Candidates are advised to bring the list of document at the time of getting appointment letter from authority of UPBSE. Candidate may have to deposit Photocopies of the documents provided in the list below:
·         10th , 12th , Graduation DMC
·         Age proof like school leaving certificate or any other
·         Photo identity proof like Pan Card, Voter Card ID etc.
·         Final Result Merit List Copy
·         Address proof i.e. Ration Card, Aadhar Card, Voter card or Driving License.
·         Two extra colored recent passport size photograph (same as pasted on computer generated application form)
·         Caste/PWD/EXS certificate to claim for seat available for reserve category.
·         Any other Relevant document that candidate mentioned at the time of application for these posts
Attention: Candidates can get latest news of latest jobs, admit cards, results, scorecard, counseling schedule and document verification of the candidates as they frequently visit website for getting  regular updates. Reader can get latest news of Haryana JBT Teachers Final Selection List, Chandigarh JBT NTT Document Verification, Chandigarh TGT recruitment latest news etc. on sscexamtricks.com. Besides this, readers can download tips-tricks & General Awareness questions answers sets for recruitment  exam / entrance exam 2015-16 prepared from most popular books to the candidates to achieve cut off marks in any exam 2015-16.
Click here to download Selection Process of IBPS Clerk Recruitment 2014-15 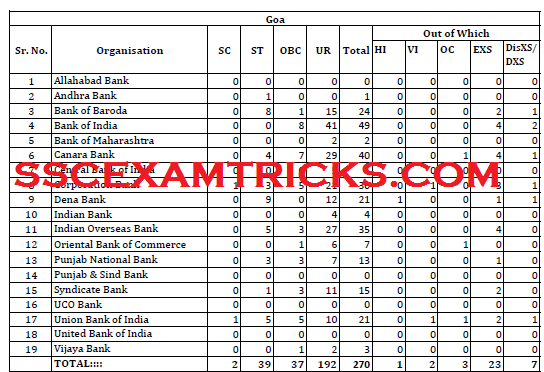