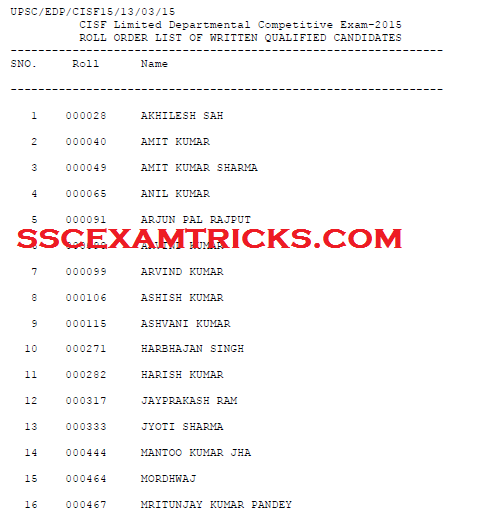 Union Public Service Commission (UPSC) has released result on 13th March 2015 on official website of CISF (ACs) Ltd. Departmental Competitive Exam which was conducted on 01st March 2015. UPSC has released roll number wise list of shortlisted candidates who have qualified for Physical Efficiency Test & Medical Test. The Central Industrial Security Force (CISF) will intimate to the candidates about the date, time and venue of the Physical Efficiency Tests and Medical Standards Tests to be conducted by them. The intimation has been sent to their respective address mentioned in the application form. In case any candidate does not receive the intimation of the result then candidate may contact to phone no. 24307747.
The marks details of those candidates who did not qualified in this written examination will be released within 60 days after the date of announcement of result. Earlier UPSC had conducted written departmental written examination on 01st March 2015 at various centres. A huge numbers of candidates had appeared in this written examination. Those candidates who had appeared in this written examination can download their result from the direct link provided below.

UPSC ACs LDC Departmental Competitive Examination 2015 Result Scorecard Marks Detail Physical Efficiency Test Medical Test Schedule Details
·         Name of Exam- UPSC CISF ACs Departmental Exam 2015
·         Name of post – Lower Division Clerk
·         Date of Exam – 01st March 2015
·         Result Status – Released on 13th March 2015
·         Next Stage – PET & Medical Test
·         PET/ Medical Test Schedule – March / April 2015
·         Official Website: http://www.upsc.gov.in/
Physical Efficiency (Endurance) Test - (PET)
Candidates who are found eligible on height parameters will undergo PET (race) followed by biometric identification & screening of testimonials and thereon chest and weight measurements by a board.
Physical Efficiency Test (PET): For Male candidates Race 5 Kms in 24 minutes.
·         For Female candidates Race 1.6 Kms in 8 ½ minutes
·         For candidates of Ladakh Region:
·         Male Race 1 Mile in 6 ½ minutes
·         Female Race 800 meters in 4 minutes
·         Pregnancy at the time of PET will be considered a disqualification and pregnant female candidates shall be rejected at this stage.
·         PET will not be held for Ex-Servicemen. However, they will be required to qualify in the medical examination.
Physical Standards Test : (Female candidates are eligible only for posts earmarked for them).
(i)            All candidates applying for the recruitment and prima-facie eligible will be called to appear in Physical Standards Test and Physical Efficiency Test at places finalized by the Commission in consultation with the CAPFs. Detailed scrutiny of their eligibility will not be undertaken before PET/ PST. Therefore, it will be the responsibility of the candidate to verify their eligibility as prescribed in this notice before appearing for PST/ PET.
(ii)           Physical standards laid down for the post of Constable are – a) Height: For Males : 170 cms. For Females : 157 cms. b) Chest: For males only – Unexpanded : 80 cms. - Expanded : Min expansion 5 cms. c) Weight : For males and Females : Proportionate to height and age as per medical standards
UPSC ACs Departmental Medical Test - A Merit list has released for short listed candidates. These short listed candidates will have to face medical examination conducted by CRPF medical Officers.
Eye sight
The minimum distant vision should be 6/6 and 6/9 of two eyes without correction i.e. without wearing of glasses.
1) The candidate must not have knock knee, flat foot, varicose vein or squint in eyes and they should possess high colour vision.
2) They must be in good mental and bodily health and free from any physical defect likely to interfere with the efficient performance of the duties.