MP Vyapam has released online admit cards on 14th April 2015 for Pre-Agricuture Test which is going to be conducted 26th April 2015 (Sunday) in the morning session from 10:00 AM to 1:15 PM at Indore, Bhopal, Gwalior and Jabalpur Centres for getting admission in B. Sc. (Agriculture, B.Tech (Agriculture Engineering) courses in various Government Colleges & Affiliated Colleges. Earlier MP Vyapam had invited online application for eligible candidates from 01st February 2015 to 03rd March 2015 on official website mponline.gov.in. The editing in application form was allowed from 04th March 2015 to 09th March 2015 on official website. The admit card contains information about date, time & venue of written test. Read the instruction carefully provided at the bottom of the page. It is mandatory to produce admit cards before getting entry into the examination hall. The admit card will be checked along with valid photo identity proof of the candidates at the venue of written examination by duty officers. No candidate will be permitted to appear in the examination without admit cards. Candidates are advised to reach at the venue 20-30 minutes before the exam time. Those candidates who had applied for these exam and waiting for admit cards / call letters for written examination; they can download their admit cards by login their account by providing their registration ID & Date of Birth of the candidates, then press submit button to download Admit card in PDF.
MP Vyapam conducts entrance examination every year for the eligible candidates for getting admission in Various Agriculture Courses in various MP Government & Affiliated College. The written examination consists of Objective type multiple choice question papers in which 04 papers will be conducted this year which is scheduled to be held on 26th April 2015. A Large numbers of candidates are going to appear in this entrance examination. These candidates can download their exam admit card from the direct link provided below.
Download Admit Cards here


MP Vyapam PAT Exam 2015 Admit Cards Call Letter Hall Tickets Details
·         Name of the Exam- MP Vyapam PAT Entrance Exam 2015
·         Purpose of Test – To get Admission in B.Tech, B. Sc. courses in various Government & Affiliated Colleges.
·         Date of Examination – 26th April 2015
·         Admit Cards Status – Released on 14th April 2015 onwards
·         Official Website – www.vyapam.nic.in
MP Vyapam PAT Exam 2015 Admit Cards – PAT Exam Syllabus, Exam Pattern
The MP VYAPAM Exam will be conducted on 26th April 2015 by Pen Mode. The OMR sheet will be filled by Blue/Black ball point pen. No rough blank sheet will be issued for calculations/rough work in exam. The exam will be a multiple choice question paper of 200 Marks in which four options will be provided out of which candidates will need to choose one correct answer. For more information candidate must download syllabus and exam pattern of MP VYAPAM PAT EXAM from the official website. The total Time duration will be 3 hours or 180 minutes. 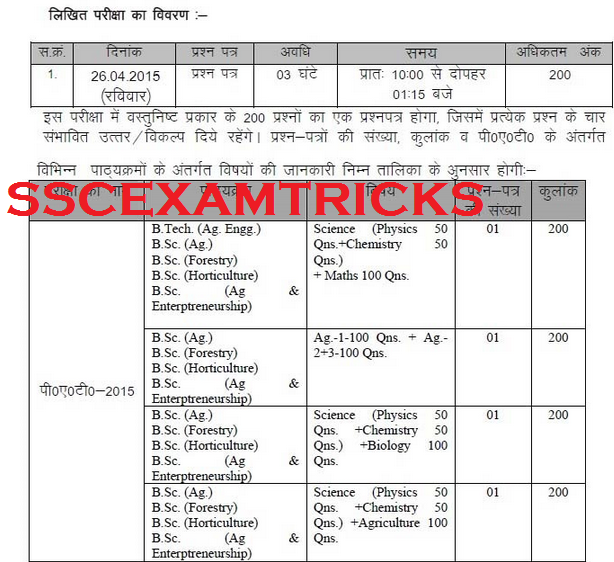