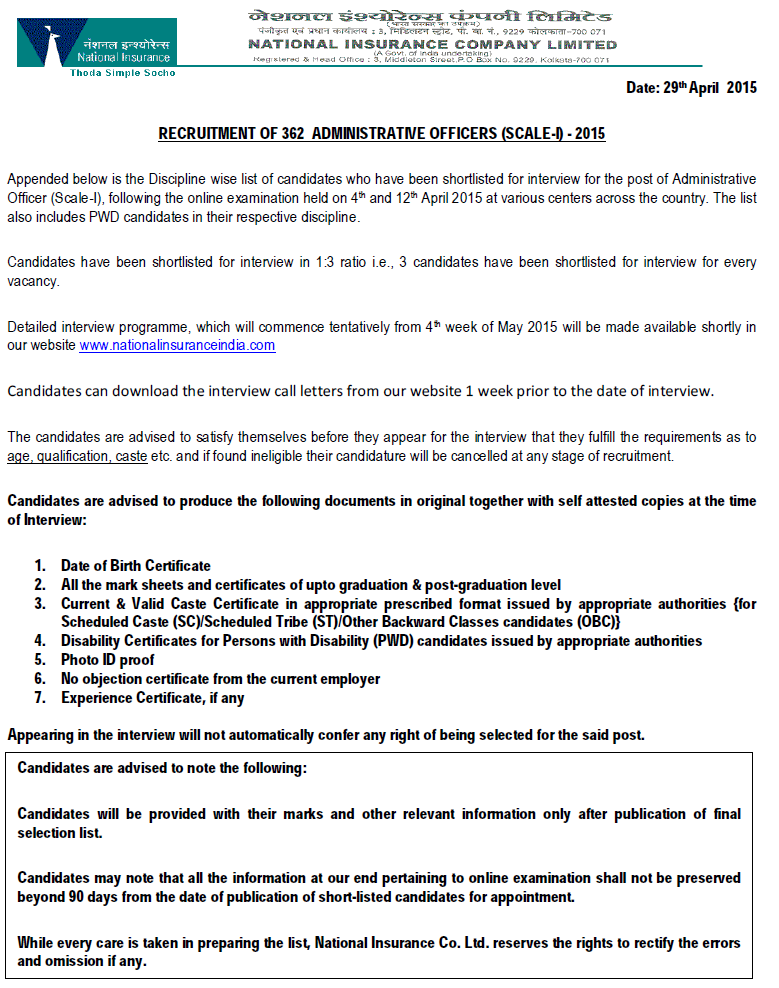 The National Insurance Company Limited (NICL) has declared result and marks obtained by the candidates in written examination which was conducted on various dates in the month of April 2015 at various centres in all over the country for a total of 362 post of Administrative Officer Scale I in Finance, Engineering, Legal, Automobile Engineering, Total Specialist, and Generalist Posts. The latest news is that NICL AO Exam 2015 result has declared on 29th  April 2015 on the official website. Earlier NICL had invited online applications from 05.01.2015 to 24.01.2015 for these posts of Administrative Officers Scale-I on official website. A huge numbers of candidates had applied and appeared in written examination. Those candidates who are waiting for online result and marks details, they can download their result and marks details from the direct link provided below.
Download NICL AO 2015 Result here

The final selection will be made on the basis of overall performance in Online Examination and Interview.
Written Examination (Objective & Descriptive)
The written examination was comprised of objective and descriptive paper which was conducted by online mode for time duration of 2 hours and 45 minutes respectively. The Objective & Descriptive Exam was available bilingually, i.e. English and Hindi except the Test of English Language.
Objective Examination
The NICL Exam was conducted on various dates in the month of April 2015. The NICL AO EXAM 2015 was conducted by Online MODE.  In Online Mode, No OMR sheet was filled by Blue/Black ball point pen.

The exam will consisted of various sections contained questions of English (30 questions of 30 marks), Reasoning (30 questions of 30 marks), Quantitative Aptitude (30 questions of 30 marks), General Awareness (30 questions of 30 marks) and In Specialist stream, an additional test to assess technical & professional knowledge in the relevant discipline (40 questions of 40 marks). The exam was a multiple choice question paper of 160 questions of 160 marks in which five options were provided out of which candidates were required to choose one correct answer. The time duration for exam was 2 hours or 120 minutes. There was 1/4th negative marking for any wrong answer. The Descriptive English Test was also conducted through online mode. Questions were displayed on the screen of your computer and candidates were provided answer by typing through computer keyboard. Descriptive Test was contained three questions for 40 marks from English Language comprising of Essay, Précis & Comprehension. The time duration for the written examination was 45 minutes only.
The total marks of the examination were 200 marks in which 40 marks were included for English Descriptive Section.
NICL AO 2015 Cut off Marks
Candidates will be shortlisted for Interview on the basis of overall marks scored in objective and Descriptive section taken together against full marks of 200.
The cut off marks will be released and shortlisted candidates will be called for interview

Interview will be conducted in two steps.

All the selected candidates must reach the venue of Interview at least 20-30 minutes before the time mentioned on the interview letter of the candidate. Selected candidates are required to bring computer generated online application, result print, original documents (10th, 12th, UC DMC, Cast certificate –If applicable etc.) and one set of self-attested of all the documents to the venue of interview. 10th Certificate is used for Age Proof. Candidate must bring at least one Address proof i.e. PAN Card, Ration Card, Aadhar Card, Voter card or Driving License.  Candidates are advised to bring two extra colored recent passClerkrt size photograph (same as pasted on computer generated application form) required for application form or other document requirements. Candidate must bring Caste/PWD/EXS certificate to claim for seat available for reserve category.  If the candidate is an employer of any organization then it is mandatory to bring original as well as photocopy of NOC (No Objection Certificate) with them.
List of Documents required in Interview
·         Printout of the valid Interview Call Letter
·         Proof of Date of Birth (Birth Certificate issued by the Competent Municipal Authorities or SSLC/ Std. X Certificate with DOB)
·         Photo Identify Proof such as Adhar Card, Driving License, Pan Card, Voter Card etc.
·         Mark-sheets & certificates for Graduation or equivalent qualification etc.
·         Caste Certificate issued by the competent authority in the prescribed format as stipulated by Government of India in the case of SC / ST / OBC category candidates.
·         OBC Certificate must be in proper format & approved by authorized committee.