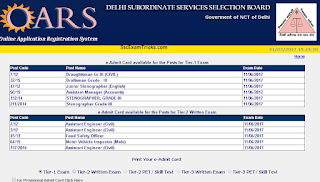 ·         Go to Direct Link provided at the end.
·         Click on the link say JE/ AE Exam Admit cards.
·         Enter Roll No. or Name of Candidate and Date of Birth.
·         Click on submit button.
·         Download DSSSB JE/ AE Exam Admit Card.
·         Save or Print the Admit Card in PDF for Exam.
MENDATORY PRECAUTIONS WHILE APPEARING FOR EXAM:
1.    Note down the Venue of Exam and plan the route to reach the venue by Car/bus/train.
2.    Read all the instruction provided in the admit cards and ensure the documents required such as ID proof i.e. driving license, PAN card etc.
3.    Candidate should bring at least one photocopy of ID proof to the venue of Exam.
4.    Affix colour photograph of same image as provided in the printed Admit Card to the provided space. Do a cross signature on the pasted colored photograph pasted by the candidate.
5.    Admit Card must be signed properly below the Colored photograph paste by the candidate. The signature must be same as it is appeared in the computer generated admit card.
6.    Use of mobile phone/Calculator/Electronic gadgets is banned in Exam room.
7.    Candidates can download their admit cards any time on the official website direct link provided below.
HOW TO REACH EXAM ROOM for EXAM with Admit Card
1.    Ensure that candidate must have Admit Cards of EXAM along with Original ID and a photocopy of the Original ID.
2.    Reach the Venue at least 20-30 minute before the time mentioned in the computer generated admit card.
3.    Check for the list of sitting plan according to the name of candidate and roll no. appeared in the admit card.
4.    Search for your name and roll no.
5.    Note down room no. floor and seat position of the back side of the Admit Card page.
6.    Computer Generated Admit Card, Original ID and Photocopy of original ID will be checked twice by Personnel/Officers.
7.    Reach to EXAM Room and ensure the sitting plan on the sheet pasted outside the EXAM room.
8.    Mark the signature on the Attendance sheet and sit on the designated computer to your Roll No.
DO and DON’TS BEFORE LEAVING FOR VENUE
It is advised to the candidates to reach the venue at least 30 minutes before the time of reporting. This recommendation is provided to relax your mind from expedition of route and prepare for EXAM for performing well. Don’t forget to bring computer generated Admit Card affixed with a coloured photograph, An Original ID Proof and Photocopy of the same ID proof which take to the venue of EXAM. In any confusion/dilemma/Illusion don’t hesitate to ask to the officers who are designated there for the help of candidate to reach to the EXAM room.
DSSSB JE/ AE Exam 2015 – Exam Syllabus, Exam Pattern
The OMR sheet will be filled by Blue/Black ball point pen. No rough blank sheet will be issued for calculations/rough work in exam. The exam will be a multiple choice question paper containing 200 questions of 200 marks in which four options will be provided out of which candidates will need to choose one correct answer. The questions will contain two sections. In first section questions will be asked from General Awareness (20 questions of 20 marks), General Intelligence & reasoning ability (20 questions of 20 marks), Arithmetic & Numerical Ability (20 questions of 20 marks) and English Language (20 questions of 20 marks). In Second section, 100 multiple choice questions will be asked for a total of 100 marks. The exam will be of 2 hours i.e. 120 minutes.
Download DSSSB JE/ AE Exam 2015 Syllabus in PDF
Direct Link to download DSSSB JE/ AE Exam 2015 Admit Cards
To Download DSSSB JE/ AE Exam 2015 Admit Card, Click on the direct link provided below,