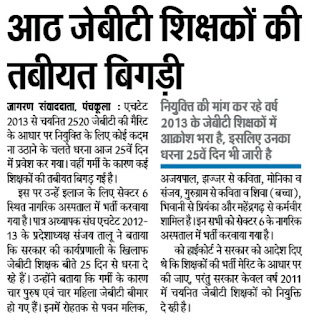 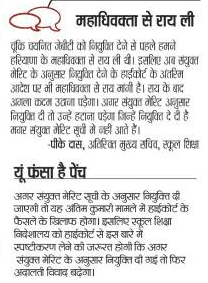 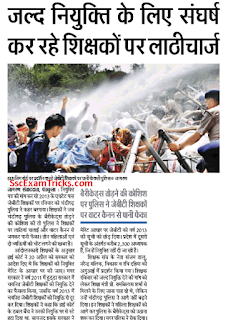 Latest News on 03.08.2015: Punjab & Haryana High Court Hearing on 1750 JBT Joining
Latest News (28.04.2017): The joining order for Haryana 7909 JBT Teachers (including Mewat cadre) has been released on official website. The appointment letter and list of selected candidates with station allotment has been published officially by the board.
Now, it is the time for the waiting list to be sorted out for filling posts which would be left vacant on the basis of total posts under advertised 2/2012.
HTET-2013 candidates as well as 9455 JBT listed waiting candidates are curiously waiting for the next move of the government. It is expected that the second merit list will be uploaded about 15-20 days after the release of final selection list by the board.
It may be available in the third-fourth week of May 2017.
Besides that Haryana JBT HTET 2013 passed candidates who are having court case regarding their joining on the primary teachers posts will attend their hearing in May 2017. 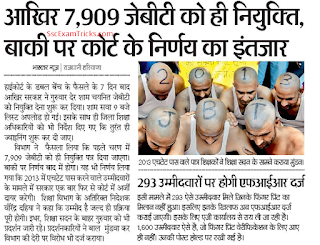 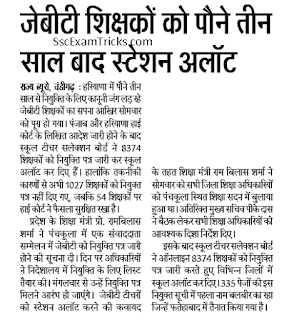 Latest News: (21.07.2015) - Joining of 1750 JBT / PRT Against Advt. 02/2012 (9870 JBT/ PRT Recruitment)
Get Latest News of Haryana JBT 2011 Result of Thumb Impression & Signature here
Punjab & Haryana High Court had hearing on the issue of Haryana 1750 JBT joining and keep the stay 'ON' on the recruitment of 1750 JBT in Haryana. The full news is given in the image provided below.
Haryana TGT Result 2016
Pubjab & Haryana High Court asked Haryana Government that how had they considered HTET 2013 passed candidates against Advt. 02/2012 as it was mentioned for HTET 2012. The Haryana Government is under process to answer this question as well as joining process of 9870 JBT Teachers.

Latest News - Punjab & Haryana High Court Stays 1750 JBT/ PRT for Joining/ Appointment (02/2012)
Haryana Staff Selection Commission had released interview result list of candidates on 14.07.2015. The next hearing will be held on 03.08.2015 with main case (9870 JBT/ PRT Joining).
Earlier Punjab and Haryana High Court had given permission to HTET 2012 qualified candidates for recruitment of 9870 JBT/ PRT Post Advt. No. 02/2012. Then it was found that JBT/ PRT posts were remain vacant. Thus Haryana Government had given chance to HTET 2013 to the recruitment of JBT/ PRT 02/2012.


The HTET 2012 candiates urged to High Court that they are present in waiting list of 9870 JBT/ PRT Joining / recruitment process and government has added 1800 candidates who had qualified later than them (HTET 2013).

The Hearing of this case will be held on 03 August 2015 in Pubjab & Haryana High Court.

Haryana 9870 JBT / PRT Additional Result Declared for HTET 2013 Qualified Candidates
Earlier these candidates had qualified in HTET 2013 Exam and submitted case to Court for attending interview with 9870 JBT/ PRT candidates. These candidates had interviewed, but result had been secured in envelop by following Court Order.