The objections can be submitted from 23rd April 2018 to 27th April 2018 up to 5 p.m. to the hsscsecyobjection@gmail.com.
It is suggested to the candidate that he/she will provide or specify name of the post, advertisement number, category number, date of examination, shift of examination rejection report otherwise objection may not be considered for change. The right answers are highlighted with yellow colour.
Download Objection Notice

Latest news 31st March 2018 - HSSC Steno Hindi and English typing test cancellation notice - HSSC Stenographer typing test new date for advertisement number 12/2015 number 2, 3,5, 6 and 8 -
Haryana Staff Selection Commission has released a cancellation notice for shorthand and transcription test for the post of steno typist Hindi, steno typist both language, junior scale stenographer both language and junior scale stenographer Hindi against advertisement number 12/2015.
In this notification, it has been notified that typing test or shorthand and transcription test which was scheduled to be held on 27th April 2018, 1st May 2018, 30th April 2018, 2nd may 2018 and 3rd May 2018 for stenographer typist post has been cancelled due to administrative and technical reasons.

The commission will modified new date for typing test or skill test for the post of stenographer typist Hindi for both language very shortly on official website.

Those candidates who have been preparing for HSSC steno typist skill test they must not done that the typing test has been cancelled and due date will be notified soon.
You are advised to keep visiting on official website for getting latest update on Haryana stenographer typist exam date.

The exam schedule is discussed here for shorthand and transcription test as per advertisement condition for those candidates who have qualified in the online written test (computer based test) held in November 2017 for various posts of stenographer in various department or boards or Corporation under government. 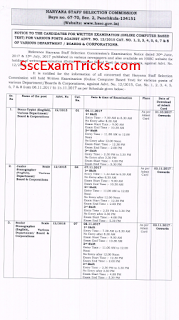 Latest news on 29th March 2018 - Revised exam date / admit card HSSC JE (Junior Engineer town and Country planning department Haryana advertisement number 11 2015 category number 10 - Download Admit Card for HSSC JE Advt 11/2015 -
The latest update in that Haryana Staff Selection Commission has uploaded in notification of revised date for the online Computer Based test post of Haryana junior engineer in Town and Country planning department under advertisement number 11 2015 category number 10.
Online test will be held on 12th April 2018 in three shifts and 13th April 2018 in two shifts. The time for the chips and rest of other conditions will remain same as mentioned in the notification issued on 15th March 2018.

The final result has been prepared on the basis of marks scored by the candidates in the written test and interview held for out of 225 marks. 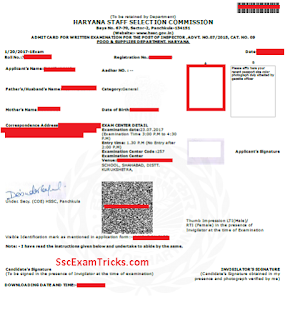 Today, Haryana Staff Selection Commission has released food inspector admit card for examination to be held on 23rd July 2017.
The admit card has been released for Food Inspector under Advt. No.  5/2015 cat. no. 9. 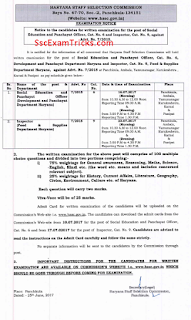 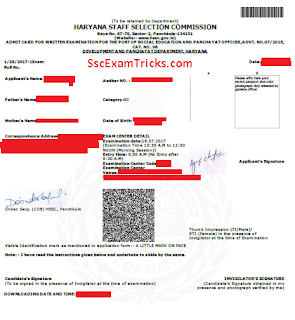 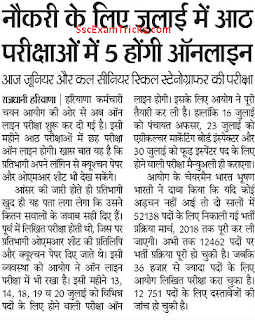 Download Admit Card
Haryana Staff Selection Commission (HSSC) is under process to check online application form filled by the candidates. The payment of application fee is investigated by the commission and those candidates who have applied and verified their application fees will be sent online admit card. The confirmation of application fee will be sent online to these candidates. HSSC is working on scheduling the commission will send online admit card for Stenographer, Forester, Inspector, Typist exam. The exam date will be published very soon. The latest news is that HSSC will upload online admit card 12-15 days before exam date. The best process is given here by which you can download your online Admit card. It is noted down that HSSC will not send any admit card through offline mode or by post to the correspondence address of the candidates. HSSC Admit card will be available through online mode only. The Admit card will be valid with photo ID proof of the candidates (PAN card/ Voter card/ any other authorized valid card).
HSSC Patwari Admit Card 2016
Gram Sachiv Call Letter

Earlier HSSC had invited application forms by eligible and qualified candidates from 22nd February 2016 to 22nd March 2016 on the official website www.hssc.gov.in. The notification was advertised for recruitment of 902 posts of Stenographers, Forester, Inspector, Typist and other various posts. Huge numbers of interested candidates have applied for these posts. The final selection will be made by measuring performance in written test, typing test and academic performance of the candidates. The written test will be announced very soon on the official website.
Latest news (20.07.2017) - HSSC Answer Keys Released for Agriculture Inspector (Soil Conservator), Social Education & Panchayat Officer, Deputy Forest Ranger under Advt. 4/2017, Advt. 6/2016, Advt. 7/2015, Advt. 12/2015 cat. no. 01, 37, 06 & 11. S.no.

The best and simplest process is described here to download HSSC Stenographer Forester Inspector Admit Card 2016. The Admit card can be downloaded by logging in your account that can be done by providing registration ID and password on the official website. When you gets log in you’re the direct link will be provided there where you can click and your admit card will be downloaded on your screen. Save and print your admit card. First ensure your name and then note down venue of examination. Plan your road map to reach the venue on time. You are also advised to follow the instructions provided in the admit card in the examination hall.