Madhya Pradesh Professional Examination Board (MP Vyapam) had released notification form 01st June to 15th June 2017 and invited applications at for posts of Sub Engineer. The selection process will be made through Exam test. 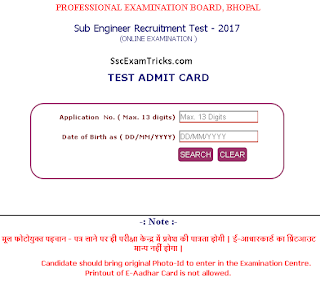 Madhya Pradesh Professional Examination Board (MP Vyapam) has released online result on 05th July 2017 for Exam held on 08 & 09th July 2017at various Exam centers for the posts of Sub Engineer.
Those candidates who had applied for these posts and waiting for their Madhya Pradesh Professional Examination Board (MP Vyapam) Sub Engineer Call letter they can download it from direct link given at the end of the page.

MPPEB SE 2014 Result Declared on 11th April 2016: The biggest news has been available as MPPEB Sub Inspector 2014 Result which has been announced along with scorecard/ marks list on vyapam.nic.in. Those candidates who had attended the written exam; they can now download their MPPEB SE 2014 Result and check their scorecard/ marks from direct link available here. The image provided here is evident of announcement of MPPEB Sub Inspector Result 2014.
MP Vyapam Police ASI Admit Card 2016
MP Vyapam Police Constable Admit card 2016

Download MPPEB SE 2014 Marks List
Asst. Sub-Inspector (LDC), Subedar (Stenographer), LDC & Stenographer Recruitment For Police H.Q., Home (Police) and  Home Guard Department) Govt. of M.P. Test Result : 2014
Final Answer
Result Note
Madhya Pradesh Professional Examination Board (MPPEB) had released official notification for 557 vacancies of Sub Engineer in Civil, Mechanical, Electrical and Draftsman and invited online applications for eligible candidates (Diploma/ BTech/ BE Degree) from 07th February to 07th March 2016 on official website www.vyapam.nic.in. The last date to pay application fee (General- Rs. 500/- and Reserved- Rs.250/-) was 07th March 2016. A huge numbers of engineering diploma/ degree holders had applied for these posts. The written test and interview are the two stages for final selection of the suitable candidates. The written test is scheduled to be conducted on 03rd April 2016 at predefined exam centres across the country. The big news is that MPPEB is going to upload Admit card / interview call letter for Sub Engineer Draftsman exam on 15th to 18th March 2016 by online mode on official website. It is noted down that MP vyapam will not send any Sub Engineer Draftsman interview Call Letter offline via speed post to the address of the candidates. The applicant will have to visit online and download their MPPEB Interview Admit card from the official page of the website.

MPPEB SE Draftsman Answer Keys 2016 Model Test Paper Solution Available on vyapam.nic.in: The latest news is that Madhya Pradesh Professional Education Board (MPPEB) has uploaded answer keys or paper solution of exam organized on 03rd to 06th April 2016 for civil, mechanical and electrical streams. The direct link is available here by following of which you can easily get your answer keys or paper solution with model test paper in PDF file.

The written test will be an objective type exam containing two parts of 200 marks. The Part A will consist of General Knowledge, General Hindi, General English, General Math, General Reasoning & Intelligence, General Science, General Computer Knowledge of 100 marks and Part B will contain subject related questions of 100 marks. The written test will be organized in morning session from 09:00 AM to 12:00 noon (3 hours). There will be no negative marking in this exam. The MP Vyapam SE/ Draftsman result will be announced within a period of 60-90 days after the exam date (expected). The result is expected to be announced in May/ June 2016. The qualified candidates will be called for interview. The minimum cut off marks of each category candidates will be evaluated as follows:
Let us take an example to calculate MPPEB Sub Engineer & Draftsman cut off marks. If a candidates answered 140 questions out of 150 questions in which he/ she made 2 incorrect, then cut off will be calculated as follows:

The process will be completed in two steps:
1.    Go to the official website i.e. www.vyapam.nic.in.
2.    Submit your application number and date of birth on the blank columns provided on the official admit card page.
The MPPEB Interview Call Letter/ Admit card 2016 and result or Scorecard for Sub Engineer & Draftsman will be downloaded on your device. Take a printout and read all instructions provided in this call letter.
Download MPPEB Sub Engineer Admit card 2016
MP Vyapam Draftsman Admit Card 2016
MPPEB Sub Engineer/ Draftsman Exam Pattern in PDF
MP Vyapam Result 2016