Latest News (07.09.2017) - The final result will be declared tomorrow at around 11:00am at www.ssc.nic.in.
However SSC SI CPO Paper I Result 2017 has been announced on 06th September 2017.
Check SSC SI CPO Paper I Result 2017 Here
Latest News (05.09.2017) - SSC SI CPO Exam 2016 Final Result 2017 Date -
The good news is that SSC is going to declare the final result of SSC SI CPO Final Exam Result 2016 on 08th September 2017 on official website www.ssc.nic.in.
The  exam result will be declared with list of finally selected candidates to be invited for appointment on advertised posts.
The result and cut off marks can be downloaded from the link given here.
SSC SI CPO Exam 2016 Final Result 2017 - Available on 08.09.2017
Staff Selection Commission Northern Region (SSCNR) had released notification and invited from applications for posts of SI CPO 2016. The selection process will be made through written exam and interview. 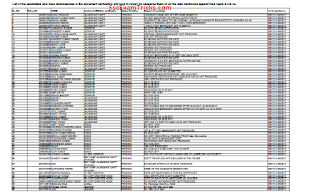 Latest News (10.07.2017) - SSC CISF Exam 2016 Admit Card for Medical Review Examination Schedule Available now -
The good news is that Staff Selection Commission has declared the review medical examination for SSC CISF 2016 which has been scheduled from 10th to 27th July 2017.
The online admit card has been dispatched to the correspondance address of the selected candidates. In case any candidates do not receive admit card; they can download it from the official website www.cisf.gov.in. 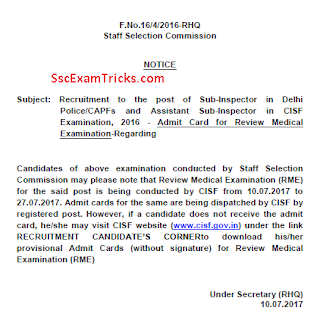 Latest News (24.03.2017): SSC CPO Medical Test and Document Verification Schedule Published -
SSC has published the medical examination scheduled for CPO on 24.03.2017 at official website www.ssc.nic.in. The deailed medical exam schedule has been published for Karnataka Kerala Region (KKR) region.
The medical test has been scheduled from 05th to 08th April 2017. The reporting time has been provided with name and roll number in the medical exam schedule published in PDF file on the website.
Those candidates who have qualified in Paper II and are waiting for Medical exam; they can download it from direct link given here. 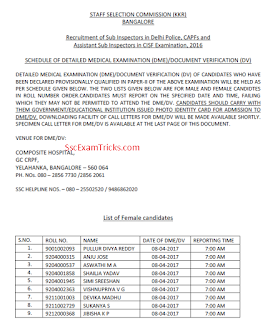 Earlier SSC CPO Paper II was conducted on 18th December 2016. Now, the provisional result has been declared and schedule of medical exam for KKR region has been published.

SSC SI CPO Tier II Result is going to be announced today (31st January 2017) on the official website www.ssc.nic.in. Yesterday, Staff Selection Commission has released notification/ notice in which the firm of most awaiting result has been announced. The notice be read through the image given below.

SSC SI ASI 2013 Result 2016 Declared on 28.03.2016: The result PDF has been available on official website ssc.nic.in in which roll numbers of qualified / selected candidates recommended for appointment/ joining against the vacant posts advertised earlier (mentioned in result card) is provided. 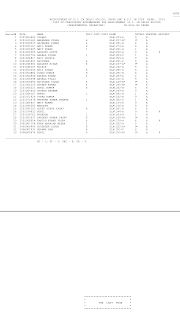 “The Staff Selection Commission, in order to maintain the integrity and fairness of the selection process, has suo-motu decided to cancel the examination for the Recruitment of Sub-Inspectors in Delhi Police, CAPFs & Asst. Sub-Inspectors in CISF Examination, 2016 held on 20th March, 2016 because one paper of the afternoon session was found to have been compromised.


The re-examination for only those candidates who had appeared in the examination in the forenoon and afternoon shifts on 20th March, 2016 will now be held on 5th June, 2016.”

Latest News (17.03.2016): Finally, the time has arrived when SSC has declared SI ASI CPO Final Result 2015 on the official website with scorecard and cut off marks decided to recommend the candidates for appointment / joining against the vacant posts. Those candidates who had qualified paper -1, paper -2, PET and medical exam; they can download their final result and merit list from direct link given here.
Download SSC SI ASI CPO Final Result 2016

Staff Selection Commission (SSC) has successfully conducted interview schedule from 07th to 19th December 2015 at predefined interview venue to verify ability & intelligence along with original documents of those candidates who have shortlisted from written exam held on 30th August 2015. The interview was done in search of selecting most suitable candidates for Sub Inspector in Delhi Police, Assistant Sub Inspector in CISF & CAPF. The absentism in interview was almost negligible and huge numbers of candidates have attended their personal interview on predefined date, time & venue described in the interview letter released by the commission on 28th November 2015. Now these candidates are searching for 'SSC SI ASI final result 2015' on internet or on official website to get latest updates regarding final result date, expected cut off marks for all categories (UR/ BC/ SC/ ST), scorecard / marks obtained & merit list prepared from both written test and interview of the candidates.

The final result is expected to be declared in December 2015. According to the sources, SSC SI ASI final result may be announced by 30th December 2015 on the official website at www.ssc.nic.in with scorecard / marks obtained in interview and final merit list prepared from marks scorecard in both written test (paper 2) and interview, those candidates who have attended interview schedule & waiting for their final result, merit list, cut off and scorecard.

Addendum - RECRUITMENT OF SUB-INSPECTORs IN DELHI POLICE, CAPFs AND ASIs IN CISF EXAMINATION, 2015.

Staff Selection Commission has declared written test result on 19.11.2015 for the posts of Sub-Inspector in Delhi Police (SI in DP), CIPFs and Assistant Sub-Inspectors (ASI) in CISF.
In this result, total 4565 candidates have qualified for interview list. 3936 male candidates and 229 female candidates are shortlisted for the interview which is scheduled to be held on 04th December 2015 by SSC selection penal.
Those candidates who are exempt from PET or qualified PET/ PST and written test, they are called for the interview and medical examination (Fitness). The interview letter for these shortlisted candidates is estimated to be available on or before 10-12 days before the interview date (04.12.2015).
Download Male Result & Interview List here
Download Female Result & Interview List here
SSC SI ASI CAPF CISF Delhi Police Interview Letter 2015
The written exam (Paper 2) was held on 30th August 2015. Those candidates who had qualified Paper 1, they were eligible to attend Paper 2. About 30101 candidates had appeared in this conventional type test and 4565 candidates are declared qualified based on the minimum cutoff marks attained by the candidates in following categories.
(Male Candidates)
(Female Candidates)

The latest news is that SSC SI ASI CAPF CISF Delhi Police result 2015 has been announced on the official website at www.ssc.nic.in. The qualified candidates have been shortlisted and called for interview. It is expected that interview letter for SSC SI ASI in Delhi Police CAPF CISF Recruitment 2015-16 will be available on 22nd – 25th November 2015 CR NR NER SR ER MPR regions.
It will be mandatory to the candidates to bring their interview letter to the venue of interview. No candidates will be allowed to attend personal interview without interview call letter. Candidates must note down that interview call letter will be valid with identity proof containing recent colored photograph only.
Download Write Up here
Check cut off here
Download Interview Letter here
The result is available in PDF and SSC have published following information of candidates shortlisted for interview. It is noted that first list of male and female candidates in roll number order qualified in interview have been uploaded as per following information:
1.    Roll Number of candidates
2.    Name of candidates (Full name)
3.    Category number  is given as 1 for Scheduled Caste, 2 for Scheduled Tribe 3 for Ex-Serviceman, 4 for OBC for Delhi Police only, 5 for Hearing Handicapped, 6 for Other Backward Class, 7 for Visually Handicapped and 9 for Un Reserved
Remember Points for SSC SI ASI CAPF CISF Delhi Police Interview 2015: Following points are discussed as remember / key points for interview.
·         It is also advised to the candidates to bring all their original sets of DMC from 10th standard to Graduation or Post-Graduation level for the verification.
·         Bring two sets of photocopies of original documents with 2-3 colored passport size photographs.
·         Reach to interview before 20-30 minutes before the reporting time.