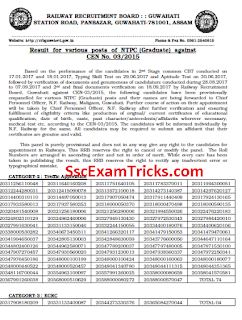 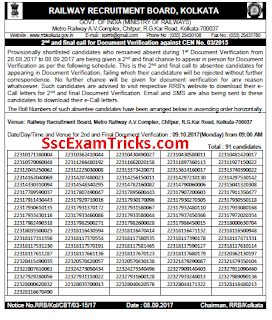 The good news is that RRB has declared document verification schedule along with Combined shortlist against the posts of Commercial Apprentice (Cat. No.1), Traffic Apprentice (Cat. No.2),
Goods Guard (Cat. No.4), Sr. Clerk-cum-Typist (Cat. No.6) and Assistant Station Master (Cat. No.7).
for a total of 2465 candidates. 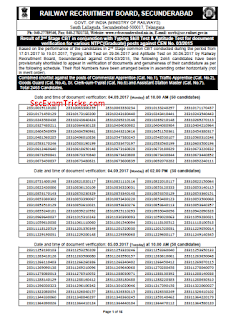 The news is that RRB has uploaded the document verification schedule for the shortlisted candidates.
Bring 2 (two) sets of clear & legible self-attested photocopies each of the original certificates/ documents mentioned above.

·         Matriculation/High School Examination & 10+2/Higher Secondary/Intermediate pass certificate
·         Graduation/Degree certificates
·         Caste certificate in prescribed formats in Annexure-I
·         Income certificate for Economically Backward candidates
·         No Objection Certificate (NOC) with all service particulars from the present employer
·         Ex-serviceman book, Identity Card in case of Ex. Serviceman candidates etc.
·         PWD certificate in prescribed proforma issued by appropriate authority/ proper Medical Board
·         Medical Certificate by an Eye Specialist in the prescribed proforma
·         Certificate / legal document to be submitted by Widow/Divorcee/Judicially separated women candidates but not remarried and sought age relaxation.
·         Upper portions of the e-call letters of 1st Stage CBT, 2nd Stage CBT, Aptitude Test and /or Typing Skill Test
·         The E-call-letter for Verification of Documents & genuineness of candidature.
·         Three passport size colour photographs same as uploaded in the online application.
·         Any other relevant certificates/testimonials/documents
·         In case of variation in spelling in name, fathers name in the on-line application and original certificates/documents, candidates are required to submit relevant affidavit executed before Magistrate or Notary 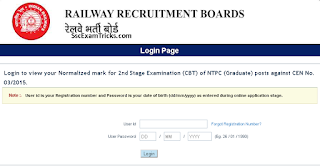 
Railway Recruitment Board has released online scorecard on 26th May 2017 on official website. The candidates who have appeared in the written test can download their scorecard/ marks from direct link given here.
Download RRB NTPC Scorecard 2017 - Released Now
RRB NPTC Result Latest News (23.09.2016):
As it is confirmed that RRB didn't declare NTPC Result on the scheduled date '20th September 2016', the prediction of new date of result announcement has been started by many websites on the internet. Many websites has claimed that RRB NTPC Result would be announce in the mid of October 2016, but the exact RRB NTPC result date is still missing.
Many of other website are publishing that RRB NTPC exam will be cancelled and a new exam would be conducted by Railway Recruitment Board. In addition, there are various rumor on the internet regarding result and further examination about recruitment of advertisement 03/2015. These information fill disappointment in the aspirant and discourage them to attend further recruitment process.
Now the question is that who is speaking truth and whose is right? what will be next step of RRB for NTPC Recruitment 2015-16? Where can you get the true and reliable information/ news of RRB NTPC Result 2016?
Answer is Here. We (SscExamTricks.com) are committed to provide you the latest and reliable information about RRB NTPC Result, medical exam and document verification and all other relevant topics.
From the reliable sources, The latest updates is that  RRB NTPC Result is expected to be available from 15th - 20th October 2016 for stage I and mid of November 2016 for stage II. The candidates have to be patient for result declaration.
"RRB NTPC Result  is going to be uploaded on 20th September 2016", the latest updates from official website. The result will be declared with the list of selected candidates to be called for medical examination and document verification.
Previously, RRB NTPC exam was conducted in three consucative months i.e. March / April/ May 2016 in 74 shifts. In this exam, about 94 lakhs candidates had appeared who are now waiting for their result and scorecard which is likely to be announced on 20th September 2016.


RRB NTPC Exam 2016 Canceled for 8 centers Check New Exam Date: Finally, it has been decided by RRB that NTPC exam of 8 centers should be canceled now. The intimation of cancelation of RRB NTPC exam 2016 has been sent to these candidates via massages on mobile phone registered on the website. RRB NTPC 2016 new exam dates will be commucated very shortly on official website. As per RRB it is said-
"We got information on irregularities at six centres in Allahabad. Also, a centre in Dwarka has caught fire. Therefore we have rescheduled the exam in these places."
About 93 lakhs candidates had appeared for these no technical examination organized at 400 exam centres,; these are waiting for their RRB NTPC result 2016. The latested news is that RRB NTPC Result 2016 for rest of exam centers (400-8) will be announced in July/ August 2016 on official website. 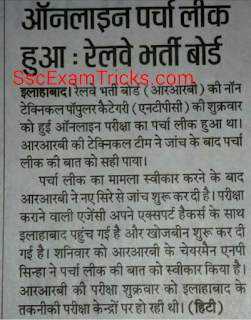 RRB had completed online process to fill applications from 25th December 2015 to 25th January 2016 under advertisement number 03/2015 on the official website www.indianrailway.gov.in. Lakhs numbers of eligible and qualified candidates had successfully applied for these posts. The final selection will be made on the basis of performance in computer based test followed by personal interview of candidates. After the personal interview, medical examination and document verification will be organized by the railway board to verify the physical fitness and originality of the candidature of the candidates. RRB has successfully conducted CBT test in March-May 2016 at many exam centres i.e. Ahmedabad, Allahabad, Ajmer, Bangalore, Bhubaneswar, Bhopal, Bilaspur, Chennai, Chandigarh, Gorakhpur, Guwahati, Jammu- Srinagar, Kolkata, Malda, Mumbai, Muzaffarpur, Patna, Ranchi, Siliguri, Secunderbad, and Tiruvananthpuram exam across the country.
RRB NTPC Result 2016 Latest News: The latest news is that RRB NTPC result for 18252 ASM Guard CA TA posts is under process and will be uploaded in July / August 2016. RRB CEN 03/2013 CBT exam was conducted on March - May 2016 at predefined exam centres across the country. Those candidates who had successfully attended for RRB 18252 ASM Guard CA TA and other posts and waiting for their RRB NTPC Result 2016, they can download their RRB NTPC Result 2016 from direct link provided in the end of the post.
RRC PWD Medical Exam Call Letter 2016

RRB CEN 03/2015 CBT test was conducted through online mode at many centres across the country. The CBT was an objective type test in which 100 MCQ were required to be answered within stipulated time period of 1 ½ hours (90 minutes). The questions were asked from GK (focused on Current Affairs), Mathematics (mainly from interest, time & distance, percentage, pipe & cisterns, average, simplification etc.), Reasoning & General Intelligence (focused on decision making, analysis, problem solving, arithmetic reasoning etc.) and General Science (mainly from physics, chemistry, biology and environmental science). There was a negative marking scheme in which each wrong answer deduced 1/3rd marks from total marks scored by the candidates for merit list.
·         General Knowledge: 20 Marks
·         Arithmetic Ability: 25 Marks
·         General Intelligence:   25 Marks
·         General Science: 30 Marks
·         Total: 100 Marks
RRB Non-Technical Result / Merit List 2016: Earlier Railway Recruitment Board (RRB) commonly known as Indian Railway had invited application forms through online mode by eligible candidates on 26th December 2015 for 18252 posts of Assistant Station Master (ASM), Goods Guard, CA, TA, SCT and other posts. The last date for application submission was 25th January 2016. Huge numbers of eligible and well graduate / qualified candidates had applied against advertisement number 03/2015. RRB has announced in the notification 03/2015 final selection of candidates to be made by checking performance in CBT and personal interview. The RRB Non-Technical result / merit list is expected to be available in July / August 2016.
Important News for RRB Non-Technical Result / Merit List 2016: RRB will be uploaded Non-Technical CBT result through online mode only. No result will be sent individually to the candidates. You should be visited to the official website to check RRB Non-Technical result / merit list 2016 or RRB NTPC Result 2016 updates regularly.
RRB Non-Technical Expected Cut off Marks: It is obvious that the successfully appeared candidates would check the RRB NTPC expected cut off marks to be achieved for qualifying interview round. Based on the exam analysis, it is observed that RRB Non-Technical CBT exam was easy to moderate level exam and cut off marks in each category can be high as per expectation made by the expert. The category wise expected cut off marks may be measure and evaluated as under:
·         For General: 80-85 Marks
·         For OBC: 75-82 Marks
·         For SC: 68-72 Marks
·         For ST: 59-65 Marks