Latest Updates -
Seat Allotment Notification for MBBS Admission in Haryana (01st September 2016):
Government of Haryana has invited online application forms for admission to MBBS/ BDS courses in all category in Govt. / Govt. Aided/ Private colleges for session 2016-17.
The seat vacant for admission and 1st and 2nd counseling dates are provided in the image given here.

Latest News (17.08.2016): The CBSE has all set to declare the counseling schedule along with process on the official website as the NEET Phase I and Phase II Result has been declared. The NEET counseling date will be uploaded very soon through a notification on the website.

The next step is that CBSE has uploaded online AIPMT / NEET Result 2016 with scorecard and rank card on official website. No result, scorecard and rank card would be sent by post to the candidates. The humble advise to the candidates is that they must keep in touch with the official website to get latest updates of counseling dates which is expected to the organized from 22nd August to 25 August 2016 in four days.
The seat allotment process would be held on 27th August 2016 and admission / seat acceptance would be organized from 28th August to 03rd September 2016.
The second seat allotment process will be one on 12th September 2016.
SSC Stenographer Skill Test Admit Card 2016 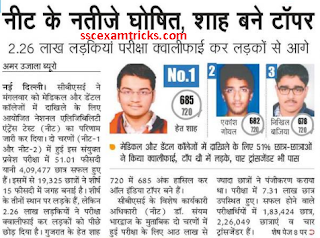 Note that the NEET 2016 counseling schedule which is discussed here is tentative and to be changed by the CBSE board. However we will update you regularly, but the last decision would be provided by the board. The best is that you should visit to official website and get the latest updates.

NEET Result Declared for Phase I and Phase II Scorecard: It is effective and surprising that CBSE has declared NEET result for both phases on 16th August 2017 on official website www.cbseresults.nic.in. In this result, Gujarat Boy has topped the test and score high marks from the rest of the candidates.
The result is available on website and you can download it from the direct link given in the end of the page.
Download NEET Result 2016 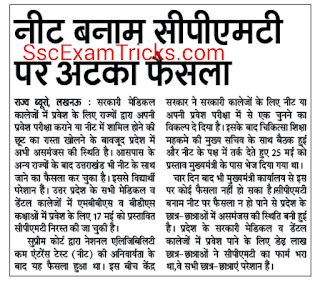 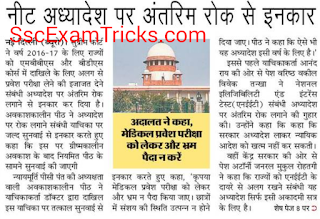 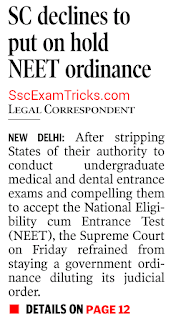 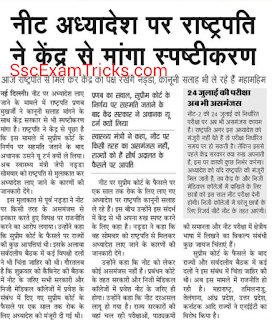 NEET Result 2016 Latest News (17.05.2016): The breaking news is that National Eligibility Entrance Test (NEET) can be stuck in long process of jurisdiction due to contradictions shown by the states for medical entrance exam. The state board and CBSE board are the major reasons for this discussed by Tamil Nadu and UP states. According to Tamil Nadu, Maharashtra and Gujarat, the entrance exam is not in the favor of states. Further Haryana, Punjab, Uttrakhand and UP are satisfied with NEET 2016. This type of conversation may affect NEET Result 2016 which is planned to be announced on 17th August 2016. You can read full news in the image provided below for your convenience.
Also See: HRTC TMPA Admit card 2016
DMRC Admit card 2016
JEE Advanced Result 2016
SSC CHSL Result 2015-16
NEET 2016 Result date: CBSE had successfully conducted AIPMT/ NEET 2016 Phase I on 01st May 2016 at many exam centres across the country. Huge numbers of candidates who had applied for this medical entrance exam had successfully appeared after passing a slight hurdle of checking / verification of candidates to follow AIPMT/ NEET 2016 guidelines. These candidates are now waiting for AIPMT/ NEET Result, Answer keys, expected cut off marks (for UR/ BC/ SC/ ST based on exam analysis), scorecard/ marks which is going to be available very shortly on AIPMT/ NEET.nic.in. The latest news is that AIPMT/ NEET 2016 result date has been announced by CBSE and AIPMT/ NEET Result is going to be uploaded on or before 17th August 2016. Those candidates who attended AIPMT/ NEET 2016 can download their AIPMT/ NEET Result 2016 Scorecard/ Marks from direct link given here.

AIPMT / NEET Result 2016: Earlier CBSE had released information bulletin on 15th December 2015 and invited the eligible candidates (12th passed with science by physics, chemistry, biology subjects) to fill online applications from 15th December 2015 to 12th January 2016. The last date to pay application fee was 12th February 2016 by online mode. The AIPMT/ NEET entrance exam will be organized into two phases: 1st phase – 01st May 2016 & 2nd phase – 24th July 2016. Huge number of candidates had appeared in this exam. The recent news is that AIPMT has been converted into NEET and collective result of both phases - phase I & phase II will be announced in August 2016 with rank number. 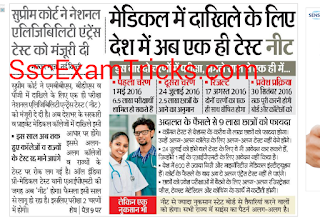 Now, this is the best time to discuss about how to download your AIPMT/ NEET result 2016. You all have downloaded your AIPMT/ NEET Answer keys 2016 of your respective sets and accessed / calculated your probable scores / marks to be obtained in AIPMT/ NEET 2016. Now, we are discussing the simplest process by following of which you can get your AIPMT/ NEET Result and scorecard on the screen of your device within a few seconds.