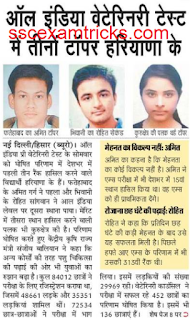 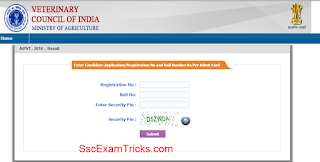 AIPVT Result 2016 latest News (15.05.2016): The breaking news is that AIPVT exam was successfully organized on 14th May 2016 at six exam centres in Hisar, Haryana and about 3196 candidates have appeared in this exam.The AIPVT Result will be announced shortly. Read complete news in below image. 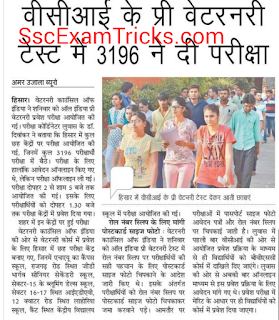 Veterinary Council of India had invited online registration from 08th January 07th February 2016 (without late fee) and from 10th February to 01st March 2016 (with late fee) from the eligible candidates (10+2 Higher/Senior Secondary Examination passed with Physics, Chemistry and Biology subjects). The last date for payment of applicable fee of online application registration was on or before 09th February 2016 (for without late fee candidates) and 03rd March 2016 (with late fee candidates). A huge numbers of candidates had applied and waiting for AIPVT Exam 2016 date which was declared as 14th May 2016 in the information bulletin provided by the VCI. AIPVT Pre-veterinary entrance exam had conducted on scheduled date, time and venue allotted by VCI. As per latest news, VCI is processing OMR sheets and matching answer with official answer keys. AIPVT Result 2016 is under preparation, thus expected to be available in the Last week of May 2016 on aipvt.vci.nic.in.
AIPVT Merit List 2016: There will be no separate merit list for SC/ST/OBC/PH candidates.
AIPVT Answer Keys 2016 Paper Solution of All sets: The Council will display Answer Key of the question giving opportunity to the candidates to challenge the Answer Key in case of ambiguity on the Council’s website www.aipvt.vci.nic.in prior to declaration of result. The Answer Keys are likely to be displayed for three to five days. The Candidates will be given an opportunity to make challenge online against the Answer Key on payment of Rs 1000/- per question challenged. Rs 1000/- per question will be refunded to the candidate if his/her challenge is accepted by the Council.

Candidates need to login their account to download AIPVT Result 2016. There are steps given to download AIPVT Result 2016. Candidates are required to login their account which had been prepared by the candidates on the official website www.vci.nic.in during apply online application for AIPVT Pre-Veterinary Entrance Exam 2016.
Process to download AIPVT Counselling Letter 2016: Candidates click on the direct link mentioned on the page. Enter registration number and password same as it is printed on computer generated AIPVT 2016 application form. Click on Submit button to download AIPVT counselling letter 2016 Scorecard/ Marks. Check AIPVT counselling Letter 2016 with result, Scorecard/ Marks obtained by the candidates.
AIPVT Result 2016
AIPVT Scorecard 2016
AIPVT Pre-Veterinary Exam Merit List 2016 for Counseling
AIPVT 2016-17 Admission Process
AIPVT Result 2016 Link 2 – If above does not work or engaged in something
by Admin at 8/13/2016 12:25:00 PM
Email ThisBlogThis!Share to TwitterShare to FacebookShare to Pinterest
Tags Admission News, AIPVT Result, MERIT LIST, SCORECARD, SscExamTricks