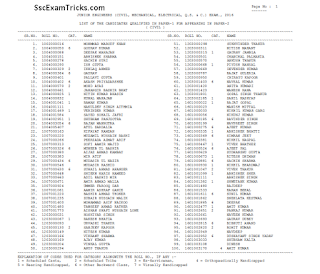 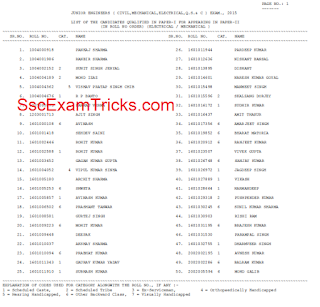 SSC JE Paper I Results declared are provisional and subject to the recommended candidates who fulfill all the eligibility conditions prescribed in the advertisement and also subject to thorough verification of their identity with reference to their photographs, signatures, handwritings, etc., on the application forms, admission certificates, etc. The candidature of SSC JE aspirants is liable to be cancelled by respective Regional Directors in case candidates are found not fulfilling the eligibility conditions or any other genuine reasons.

The SSC JE Result has been available in PDF which can be downloaded either on official website address (mentioned above) and direct link given in the end of the page. Click on that link and download SSC JE Result 2017 Paper I II Scorecard / marks. Open the PDF file in adobe reader and check your name and roll number in the list of qualified candidates for Paper II & Interview.