Latest news on 13th April 2018 - SSC CGL Tier II answer key released now -
The good news is that Staff Selection Commission has conducted computer Based test of Combined Graduate Level CGL Tier 2 examination from 17th February to 22nd february 2018 and re-exam was held on 9th March 2018.
The news is that Staff Selection Commission has released online answer key for this Tier 2 exam and re-exam. The candidate can download their answer key by using login details (user id and password) from the link given here.
The objection of the answer keys can be submitted from 13th April 2018 to 16th April 2018 through online mode by making a payment of Rupees 100 per answer.
The Representation received after the due date will not be entertained under any circumstances. 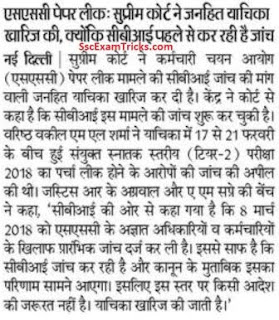 The latest news on SSC CGL Tier 2 exam which was held on 17 February to 21st February 2018 is that the Supreme Court has cancelled the plea which the investigation was asked to be done by CBI because the investigation has already forming by CBI.

SSC CGL Tier 2 paper leak was illustrated in the month of April 2018. According to the CBI, investigation has been completed against from some unknown SSC officials.

The final decision on the SSC CGL Tier 2 paper leak matter will be according to the law. No petition is required in order to obtain the order for investigation.
Latest News (30.01.2018) - SSC CGL Tier II Admit Card 2018 Released Now -
Exam Date - 17th to 22nd February 2018


The candidates can download their cut off merit list and shortlisted candidates to be called for Tier II from the link given here.

All of you are agree that everybody who have attended or not attended the examination must have an eye on SSC results online. Today, we are discussing some SSC CGL latest news, ssc cut off, ssc tier 2, ssc result site, ssc cgl 2013, ssc cgl 2014 result, ssc cgl tier 2 results.

Besides that many aspirants suffering ssc result website to gather SSC CGL latest news.
Latest News (10.10.2017) - SSC has informed to the candidates by its official notice that SSC CGL Tier I Result 2017 date has been revised now. The result will be declared on 31st October 2017 at www.ssc.nic.in.
The notice for revised result date can be downloaded here. This result will be available with cut off / merit list of category wise candidates.

SSC CGL Tier 1 was conducted on OMR Sheet and online mode in which answers were provided by darkening through blue/ black ball point pen in it. Those candidates who had attended CGL Tier 1 exam from 05th to 24th August 2017 had given their answers online as well as offline.
Great to know -
Today, SSC latest news is that staff selection commission is working on checking these OMR sheet filled by the candidates along with online sheets and matching their answers with correct ones.
As per SSC Exam Calender 2016-17, SSC will release CGL Tier 1 official answer keys in the third or fourth week of September 2016 (expected). Those candidates who have attended CGL Tier 1 exam 2016, they can download their answer keys provided below.


SSC CGL Appointment/ Joining 2018 for All Regions Download at www.ssc.nic.in

Latest News (11.01.2018) - SSC CGL Tier I Result has been revised now and new / correct / modified result has been uploaded on the official website.
The cut off marks for SSC CGL Tier II exam has been published now which can be downloaded from the link given here.

SSC CGL Tier I: Cut off for List II -

SSC CGL Tier I: Cut off for List III - 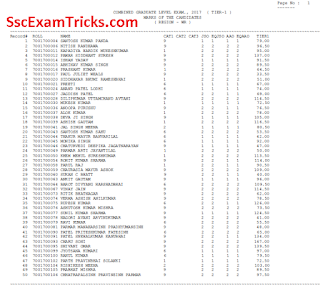 Latest updates on SSC CGL Tier I Result 2017 -
Finally, SSC has uploaded the result of Tier I Examination on 31st October 2017 around 3pm. (As we reported earlier to all our readers).
The write up has been uploaded in which cut off marks for each category has been mentioned. The written exam was held from 05th to 24th August 2017.

The summary of write up and Tier I result have been discussed precisely with you. The main points of this result are described as -
Download List I: Candidates qualified in Tier-I for appearing in Tier-II (Paper-I, Paper-II, Paper-IV (General Studies (Finance & Accounts) and Tier-III
Cut off Details for  List I:

Download List IV: LIST OF CANDIDATES WHO HAVE APPEARED TWICE AND CANDIDATURE HAS BEEN CANCELLED
Latest News (31.10.2017) - SSC CGL Tier I Result 2017 to be available around 03:00pm on www.ssc.nic.in. 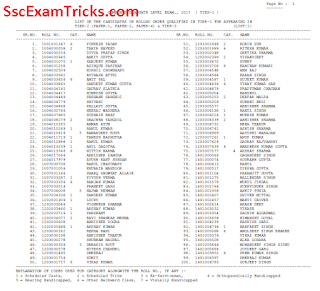 The staff selection commission is working on the process to upload answer keys of CGL tier 1 exam held on 27th August 2016. The SSC Tier 1 Answer keys will be available officially very shortly on the official website at www.ssc.nic.in.
It’s great -
That many website has uploaded the unofficial answer keys of SSC Tier 1. Likewise they also provides SSC CGL updates regularly, but we recommend you that you should visit official website regularly to get SSC CGL Latest news. Based on SSC latest news, the staff selection commission will provide you SSC exam result for CGL Tier 1 with in one or two months on the official website.
Earlier -
Staff Selection Commission had successfully conducted CGL Tier 1 examination from 05th to 24th August 2017 at predefined exam centres across the country in which huge numbers of eligible and well qualified candidates had attended with online SSC Admit card and their photo identity proof on reporting time and venue mentioned.
Today, they are waiting for their online SSC result SSC CGL Answer keys / result / scorecard / marks list of the CGL Tier 1.
Best information from us to give you SSC Latest news -
This page is dedicated covers SSC CGL Tier 1 Result date (expected dates) along with Merit list, Scorecard/ Marks list, Cut off, Answer Keys  of 05th to 24th August 2017 and we inform you about ‘Best way to download SSC CGL result 2017 for tier 1 with scorecard’ with Tier 2 exam date here.
First Time –
Staff Selection Commission had conducted CGL tier 1 exam by both modes; online and offline at allocated exam centres. It is first time that numbers of SSC exam question in CGL tier 1 has been reduced from 200 to 100 to answer. 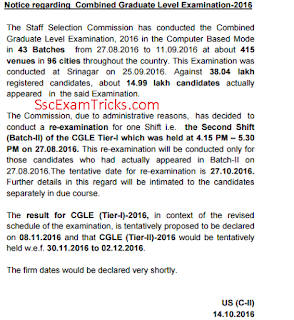 These candidates can download SSC CGL Tier 1 2016 result on the mentioned dates. You can download official notice in which SSC CGL Result dates are given from direct link given here.

SSC CGL Admit Card/ Result 2018: Now you are informed about SSC CGL Final Result 2018 and SSC latest news. So now, you are ready to download SSC Exam result for Tier 1 which will be uploaded as it gets announced by the staff selection commission.
You will be regularly updates in case any updates will be provided by our reliable sources. To get latest information about official Answer Keys, Merit List and SSC CGL 2018 Tier 2 Exam Date ssc.nic.in.
by Admin at 6/11/2018 12:42:00 AM
Email ThisBlogThis!Share to TwitterShare to FacebookShare to Pinterest
Tags ANSWER KEYS, RESULT, SCORECARD, SSC CGL, ssc clg news, SSC RESULT, SscExamTricks, staff selection commission