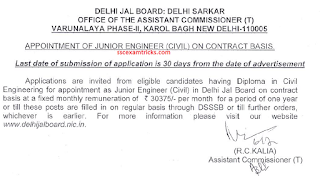 Delhi Jal Board had released notification on 6th July 2016 for recruitment of 230 posts of Junior Engineer in Civil, Electrical and Mechanical engineering departments.  The application process was held by offline mode and conducted from 6th July to 6th August 2016. The application was to be submitted at Office of the Assistant Commissioner (T), Delhi Jal Board, Room No.212, Varunalaya Phase-II, Karol Bagh, New Delhi- 110005 on or before 30 days after the date of release of notification by the board.
Enormous of candidates have applied and sent the application to the above said address. These candidates are now waiting for their Delhi Jal Board JE Interview call letter which is expected to be provided in the month of August 2016.  The latest news from our reliable sources is that Delhi Jal Board is going to conduct interview in August / September 2016 for the respective engineering departments.
Also see: NEET Result
UIIC AO Interview letter

The performance in the interview will be measured and a merit list will be displayed on the notice board of the website. Based on the merit list the candidates will be called for appointment and seat allotment against the advertised vacancies. The result will be announced very soon. The Delhi Jal Board JE Merit list of the candidates can be downloaded from direct link given at the bottom of the page.
The interview will be organized in which viva voice will be conducted will be conducted along with document verification of the candidate. All the candidates are advised to bring there all original documents and certificates to the interview venue.  Don't forget to bring a set of attested photocopy of all original documents. The document verification process will be organized before conducting viva voice of the candidates.  Ensure all documents should be arranged in descending order for easy access to the officials.  Put Delhi Jal Board JE Interview Call Letter at first and then photo ID proof would be shown before the interview.

How to download Delhi Jal Board JE Interview Call Letter 2016