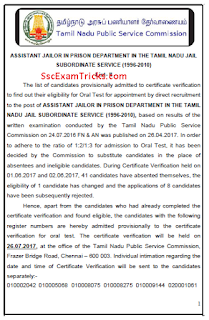 The links are provided at the end of the page.

Tamil Nadu Public Service Commission (TNPSC) is under process to scrutinize those application form which are not valid. That means those candidates who have not paid their application fee on or before the last date. After this sorting, a list of eligible candidates will be published who will be permitted to attend the written exam which is planned to be organized on 06th November 2016.

TNPSC Group 4 Hall Tickets will be uploaded by the commission on the official website www.tnpsc.gov.in. The eligible candidates can download these call letters from 20th October 2016 onwards.
Bonus Link: TNPSC Group 2 Hall Ticket 2016
Remember that the TNPSC Group 4 Hall Ticket will be valid with any of photo identity proof of the candidates which have coloured photograph of the candidates and issued by the government agency.
Earlier Tamil Nadu Public Service Commission (TNPSC) had invited application form for recruitment of 5451 vacancies of Group 4 posts. The application process was online and the last date to fill the application form was 08th September 2016 which was extended to 14th September 2016.
Huge numbers of intermediate passed applicants had applied for these posts. The selection will be made by performing written test follows document verification of the qualified candidates. The written test marks will be given high weightage for final selection.
Highlight of Written Exam – Prepare Accordingly for Good Result
Total Papers: Two
Language: English + Tamil
TNPSC Syllabus and Exam Pattern for Paper-I:
·         General Studies (75 questions)
·         Aptitude Test (25 questions) and
TNPSC Syllabus and Exam Pattern for Paper-II:
General English / Tamil (100 questions).
Choose either Tamil or English Language.
Total: 200 questions