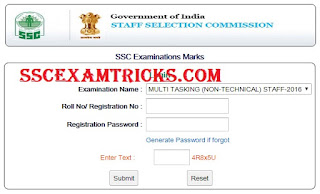 Latest News (27.04.2018) -The latest news is that staff Selection Commission is ready to declare the result of non teaching staff (MTS) examination 2016 on 30th April 2018 on official website www.ssc.nic.in. Those candidates who had appeared in the examination and qualified the skill test can download their final result from the link given here.


Earlier it was discussed that SSC may declare the result on 27th April 2018. The result will be available in PDF format which can be downloaded from the link given here.
It is advised to the candidates to keep visiting the official website as the result may be available as soon as possible by the commission. Huge numbers of candidates are waiting and due to heavy traffic the website may get slow so you are suggested to try for refresh the page on or after every 10 or 50 minutes.
The re-examination for paper 1 had been conducted on 16th September and 26th October 2017 at various exam centres.

Latest update on 11th April 2018- SSC MTS final result 2018 date Announced now -
According to the staff selection commission result report, the date of declaration of SSC MTS final result is set as 27th April 2018.
It may be noted that sometime it is seen that Selection Commission has declared the result two or three days previous to the date of result set by the SSC. So keep visiting the website regularly to download SSC MTS write up in which detail of SSC MTS result, cut off marks, list of selected candidates and further process of recruitment will be mentioned.


DV Call Letter for All Regions -

The result for SSC MTS exam will be declared on 15th January 2018 at www.ssc.nic.in. The final merit list will be prepared on the basis of score obtained in objective test.
The cut off marks will be announced on the same date with the name / father name of the candidates.
The shortlisted  candidates will be called for Descriptive test.
SSC had made registration through submitting online applications from 31st December 2016 to 30th January 2017 in which a huge numbers of 10th passed candidates had applied for these 8300 advertised posts of Multi-tasking staff in all SSC regions. Those candidates who had applied for these posts are now waiting for their SSC MTS Hall Ticket 2017 which can be downloaded from direct link given in the end of the page.
The final selection for SSC MTS 2017 will be through measuring performance in written test (Paper I & Paper II) of the candidates. The written test will be organized on three different dates i.e. 16th & 30th April 2017 and 07th May 2017.

The re-exam call letters for Western Region has been available now. 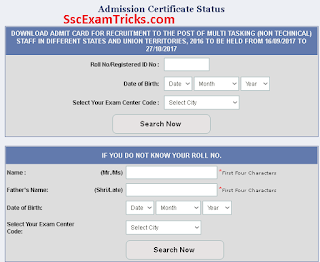 Online Exam Tutorial for Multi Tasking Staff (Non-Technical) Examination,2016 (English version)
The online admit card will be available about a week before the date of examination.
Latest News (22.05.2017): SSC MTS Exam Cancellation for Dates 30th April and 14th May 2017 -
Staff Selection Commission has uploaded the notice for cancellation of examination held for the post of Multi-tasking staff held on 30.04.2017 and 14.05.2017 and to be conducted on 28th May, 04th & 06th June 2017.
These exams will be rescheduled in September-October 2017 through online mode. The intimation will be sent to the official website.
Read the notice for SSC MTS Cancellation Exam 2017 - 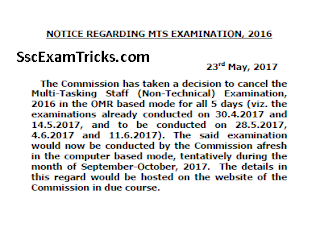 Latest Updates (11.04.2017) - SSC MTS Admit card Release Date for All Regions -
The breaking news is that SSC MTS Admit card for the all regions (expect SR region) will be available on 17th April 2017. According to the notice available on SSC NR Region "MTS ADMIT CARD FOR THE CANDIDATES APPEARING IN THE STATE OF DELHI, RAJASTHAN AND UTTARAKHAND WILL BE AVAILABLE ON SSCNR WEBSITE FROM 17th APRIL 2017".
This shows that the candidates need to be ready for downloading online admit card for NR, ER, KKR, MPR, CR, NWR and WR regions.


The breaking news is that SSC has been made available MTS Admit card online at www.ssc.nic.in. Those candidates who have been applied for Multi-tasking Staff vacancies can download their online call letters from the direct link given here.

The Admit card for CR Region has been available now. 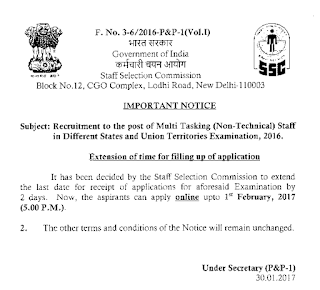 Get notification here
Staff selection commission is going to upload SSC MTS Admit Card 2017 in the first week of April 2017 on official website www.ssc.nic.in. These hall tickets will be available around 02nd to 05th April 2017 and intimation for their uploading on website will be sent through email and SMS to the candidates.

The process to download SSC MTS PWD Final Result is mentioned as below:
1.    Go to the official website or click on the direct link given in the end of the page.
2.    Enter registration details and press submit button.