Latest news on 29 September 2018 -  Haryana Staff Selection Commission has released the notice for scrutiny of documents to absentee candidate before the interview for the post of conductor against advertisement number 4/2017 category number 2 of state Transport Department Haryana -
the scrutiny of documents of absentee candidates  will be held on 3rd October 2018 at Panchkula.
Download the notice for absent candidates from the link given here -

Scrutiny of Documents of the candidates: from 15.09.2018 to 19.09.2018.
It is mandatory for the candidate to reach the venue at 9 a.m. at commissioner's office Bay number 67-70 Sector 2 Panchkula with all original document, effect of self attested copies of all documents, one ID proof and copy of downloaded application form.
In case any candidate do not appear for scrutiny of document he or she will not eligible/ able to attend interview round and no opportunity will be given further to the candidate.
About twice of candidate against the number of vacancies have been called for interview the date of interview will be intimated after the scrutiny of documents only eligible candidates will be invited to attend the interview one roll number is kept reserved due to technical grounds.
Haryana Roadways conductor interview call letter will be available about a week before the date of Scheduled interview the interview date will be intimated immediately after the scrutiny of document process the interview call letter will be given to the eligible candidates the candidate can download their interview letter by logging their account through registration id and password. 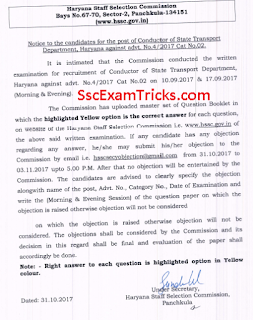 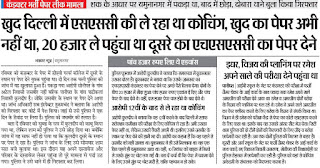 Latest News (10.08.2017) - Haryana Roadways Driver (Cat No 1) Exam Answer Keys 2017 Available Now -
Today the good news is that HSSC has uploaded the answer keys of exam held on 06th August 2017 for Driver posts in Haryana Roadways Department.
The Answer Keys of All Sets has been uploaded which can be downloaded from the link given here.

In case of any objection regarding the answer keys, the candidates can submit the objection letter from 09th to 12th August 2017 to the official email hsscsecyobjection@gmail.com. 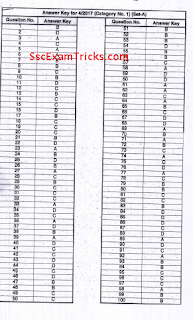 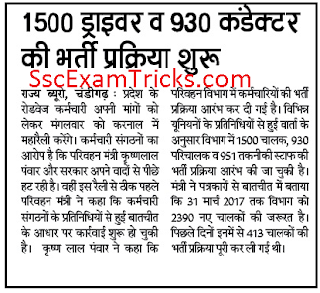 Earlier HRTD had invited online applications in March 2017 on the website from 10th & 12th passed candidates. Huge numbers of candidates were filled and submitted these application form.
The final selection will be made through written test, trade/ skill test followed by the interview. The merit list will be prepared on the basis of performance in written test and interview.
The further details/news pertaining to the recruitment process can be read from the newspaper cutting given in the image.
Those candidates who have applied for these posts and now ready for downloading their online admit card; they can download it from the direct link and following steps given in the end of the page.

The best steps are given as follows:
1.      Visit official website and click on the recruitment button given in the left middle position of the homepage.
2.      Check and see the column of ‘Bus, Driver and Technician Recruitment 2017’ and click on the link given as ‘Haryana Roadways Result 2017’.
3.      Enter your login details such as login ID and password.
4.      Click on the login button.
5.      The ‘Download Result'.
6.      Check all the details pertaining to exam date, venue etc. and set A4 size paper for taking printout of the page.
7.      Take printout and read the instructions given on that page.
Downloading Link –
Haryana Roadways Driver Conductor Technician Admit Card 2017
Newer Post Older Post Home