The Stenographer exam was conducted on scheduled date and time as mentioned in admit card and language of exam was Hindi & English (expect part III). SSC Stenographer exam was an objective exam of MCQ paper containing four alternative answers and candidates were required to select one correct answer among them. The OMR sheets had circles which were to be filled by blue /black point pen. The total 200 questions were asked from GI & Reasoning (50 questions), General Awareness (50 questions) and English language (100 questions). SSC Stenographer exam was held in morning session from 10 am to 12 noon. Total time duration for exam was 2 hours. There was a negative marking of 0.25 marks for each wrong answer delivered in the examination.
SSC Stenographer Scorecard 2018 for Grade C & D posts: The latest news is that SSC Stenographer result and scorecard is getting uploaded after verifying / matching OMR answer sheet with the correct answers. This result and scorecard is predicted to be available soon with marks list and category wise cut off marks of the candidates.

Procedure to download SSC Stenographer Result 2018: It can be predicted easily that SSC will declared result of Stenographer (Grade C & D) in PDF file in which roll numbers and name of the candidates will be provided with further information/ instructions to the list of selected candidates to be called for next stage of selection for these posts. The direct links are given here which will move you to the official page where you can download your result/ scorecard/ merit list of candidates. Then you can download and open your result PDF file. Check your roll number or name in this list and read carefully the instructions provided by the commission.
Check SSC Stenographer Result 2016
Check Scorecard/ Marks List
List of Selected candidates for Skill Test
SSC Stenographer Typing Test Admit card Link for All Regions -

SSC Stenographer 2016 document verification admit card all regions like central region and rest of regions have been available now.

In the document verification candidates required to bring all the original documents at the venue of scrutiny of documents. All educational certificates, caste certificates, experience and other certificates like photo ID proof, application form (submitted for SSC Stenographer recruitment 2016) will be checked by the officials for evaluating the originality of the candidate.
In case any candidate is found guilty in any respect he or she will be shorted out from this recruitment and candidate will not be considered for further recruitment processes.

It is advised to the candidate to bring a set of self attested copies of all original documents at the venue. Bring colour passport size photograph 2 or 3 with this set of photo copies of documents.

Latest Updates (15.09.2016):
On 17th August 2016, the exclusive news is that Staff Selection Commission has released scorecard for SSC Stenographer exam held on 03rd July 2016 on SSC official website at www.ssc.nic.in. Huge numbers of candidates are waiting for their scorecard and finally the commission has uploaded in which roll numbers and total marks has been provided. Earlier SSC has declared SSC Stenographer Result in which the candidates are shortlisted for skill test. The SSC Stenographer Skill Test date is just to be announced on the website with a notice in which date, time and skill test venue will be provided.

However, SSC Stenographer Result has been uploaded on ssc.nic.in, few days ago but still the qualified candidate will have to pass two or more process to get finally selected for the advertised posts. SSC stenographer salary is also provided in the details provided on this page.
It seems that SSC stenographer recruitment will be completed within next few months as the SSC Stenographer notification was released in 2015. SSC Stenographer online process was adopted to collect SSC application forms.


SSC Stenographer Cut off marks is discussed here on the basis the candidates are shortlisted for skill test. The category wise cut off marks is given as follows: 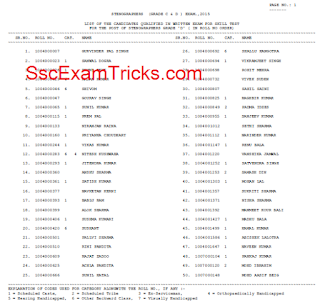 As per notice officially released “The result of written part and skill Test in Stenography (Hindi / English) were declared and placed on the Commission’s website on 29.07.2015 & 10.11.2015, respectively.” The write up, result and marks has been uploaded now on website www.ssc.nic.in.


Those candidates who had attended written test as well as skill test/ typing test can download their SSC Stenographer Final Result 2015-16 from direct link given here.

by Admin at 8/25/2018 09:52:00 AM
Email ThisBlogThis!Share to TwitterShare to FacebookShare to Pinterest
Tags ADMIT CARDS, CUT OFF MARKS, SscExamTricks