Latest News (22.11.2017) - Haryana Driver Skill Test Admit Card 2017 -
However, no information about the uploading of skill test admit card was provided in the notice for Driving test of the qualified candidates, but it may be uploaded around 23rd - 25th November 2017 on official website (news from the sources).

The candidates are required to login their account for downloading their skill test call letter. The date, reporting time and venue of skill test will be provided in the online admit card for driving test.

Latest news (11.11.2017) _ Haryana Roadways Driver Result Declared
www.hssc.gov.in/writereaddata/Results/421_1_1_scrt-hvd-result-sd.pdf
The driving test date has been published now.
In this driving test, the candidates are required to bring their all original document for scrutiny / verification by the official.
The other mains points of Haryana Roadways Result 2017 for Driver are -

The admit card for skill test may be available about a week before the date of skill test. It is about to come around 22.11.2017.
The candidates are required to login their account for downloading Haryana Roadways Driver Skill Test Call Letter 2017.
Latest News (31.07.2017) - Haryana Roadways Driver Admit Card 2017 Available at 4pm -
Today, the good news is that HSSC has uploaded online admit card of Drivers only (not for conductors) under Advt. No. 4/2017 category no. 1 for written exam to be held on 06th August 2017. 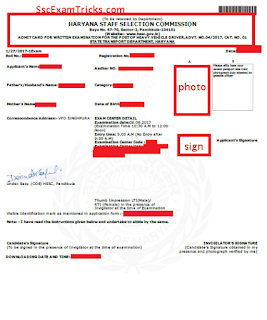 Important Points -
Download Haryana Roadways Driver Admit Card 2017 - Released now
Latest News (18.07.2017) - Haryana Roadways Driver Advt. No. 4/2017 Cat. No. 1 Exam Date Announced Now-
The good news is that Haryana Staff Selection Commission has announced the date of Driver under Advt. No. 4/2017 Cat. No. 1 which has been scheduled to be organized on 06th August 2017 in Morning session from 10:30am to 12:00noon. Haryana Roadways Driver Exam Admit card will be available online on 31.07.2017 at www.hssc.gov.in.
The reporting time for Driver exam will be 09:30am. The exam will be held at Ambala, Kurukshetra, Karnal & Panchkula districts.
The final merit list will be prepared out of 225 marks based on written test and interview marks.

Read the rest of news from the given image. 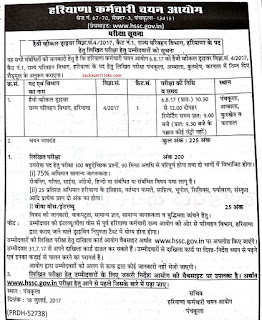 Bus conductor –
·         The candidate will selected on the basis of written test and interview.
The interested candidates can submitted their online applications for HRTC Driver Conductor Recruitment 2017 from the link given at the end of the page.
Latest Updates - Last Date Reminder -
Latest News (26.06.2017) - Hry Roadway Driver news - 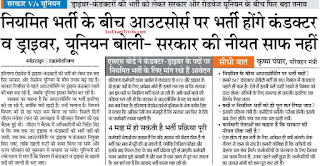 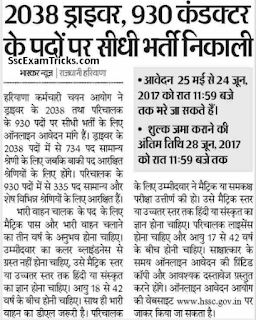 Read the news given here - 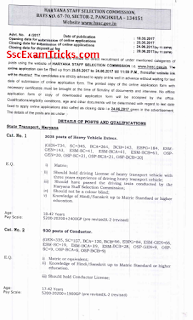 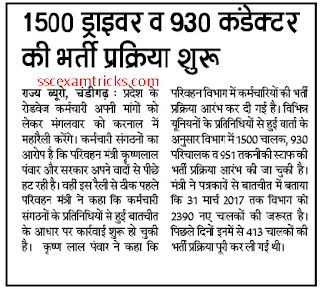 Haryana Roadways Department has all set to upload notification for 3381 vacancies of Driver and Conductor. The notification is expected to be available in April/May 2017. The submission of application form will be adopted through online only. The starting and closing date will be intimated soon through official notice on the website.
Also Check –
Rajasthan Animal Husbandry Sale Representative Admit Card 2017
Check Haryana Roadways Notification Latest Updates

At least one set of self attested copies of all the documents mentioned in their application form.
Download Notice for Absentee
Schedule for document verification for Absentee