Latest News (02.06.2017) - Rajasthan Patwari Mains Result Declared Now -
RSMSSB has declared the mains exam held on 18th December 2016 on official website http://rsmssb.rajasthan.gov.in/.
Download Mains Exam Result
Latest News 18.03.2015:
The big breaking news is that RSMSSB Patwari Pre Exam result has been published now on rsmssb.rajasthan.gov.in. The roll number wise provision list of candidates called for main exam has been uploaded on 18th March 2016. Those candidates who are looking for their preliminary exam result; they can download the list of shortlisted candidates for main exam from direct link given here.
A total of 66142 candidates have been qualified in pre exam and qualified for main exam which is going to be organized on 07 th May 2016.


Download RSMSSB Patwari Pre Exam Result 2016
RSMSSB Patwari Pre Exam was organized on 13th February 2016 across Rajasthan state. The preliminary exam was an objective type test in which questions were given in four sections of general awareness, general math, general Hindi and computer based on 10+2 level/ standard. The OMR sheet was given and four choices were provided in MCQ question paper.  6.42 lakhs of applicants had attended with printed Patwari Admit card 2016 brought at the venue of pre exam. Now, these candidates are looking for result date, scorecard/ marks and expected cut off marks for each category to qualify for main exam.
Also See: RSMSSB Gram Sevak Hall Ticket 2016
Many website are claiming that the RSMSSB Pre exam result is going to be declared very soon. But only few of them are providing information regarding result and scorecard of pre exam. However, RSMSSB is likely to announce preliminary exam result in March or April 2016. Here, you can get trusted and reliable latest news of pre exam result, cut off marks for main exam and main exam date, main exam call letter and final merit list regularly via this page.

The pre exam was held on 13th February 2016. The syllabus of preliminary exam was based on 12th standard / 10+2 level In this objective type exam, questions were asked from General Knowledge (100 marks), General Math (100 marks), General Hindi (50 marks), Computer (50 marks) set for a total of 300 marks. The time duration was 3 hours. Each incorrect answer was given a penalize candidates to deduce 1/3rd of allotted marks. From the pre exam analysis, it was observed that the overall level of preliminary exam was easy to moderate. The competition level may be high. Thus, the expected cut of marks for each category is described as follows:
For General: 170-175 marks
For BC – 160-168 marks
For SC – 148-155 marks
For ST – 135-142 marks
The latest news is that RSMSSB Answer keys for Preliminary exam will be available in the end of April 2016 on the official website.
Also Check:  HP Patwari Interview Letter 2016 Final Result 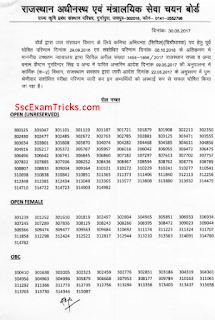 Finally, the time has come to make discussion about the best procedure to download Rajasthan RSMSSB Patwari Mains 2016 Exam Result 2017. The result may be published in PDF file in which list of shortlisted candidates will be provided with name and roll number. You can search your roll number in that list.
Now, it’s the time to check your scorecard. It is mandatory to login your account before checking your RSMSSB Patwari scorecard. Enter your registration number/ application number and password same as provided after successful registration or application submission. Your scorecard will be displayed on the screen. The direct links for Mains Exam result and scorecard are given here.
Download RSMSSBPatwari Mains Exam Result 2017
Check Scorecard / Marks Obtained
RSMSSB Answer Keys of Preliminary Exam 2016
List of shortlisted candidates for Main Exam
RSMSSB Patwari Exam Latest News
Rajasthan Patwari Main Exam Pattern
by Admin at 6/08/2017 12:01:00 PM
Email ThisBlogThis!Share to TwitterShare to FacebookShare to Pinterest
Tags ADMIT CARDS, APPOINTMENT LETTERS, MERIT LIST, Patwari Result, rajasthan patwari result, RESULT, rsmssb main admit card, rsmssb result, SscExamTricks