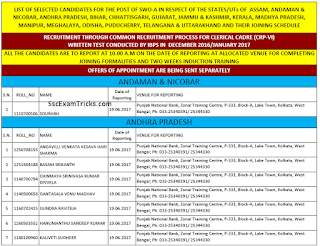 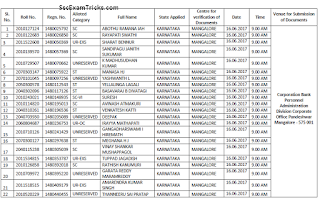 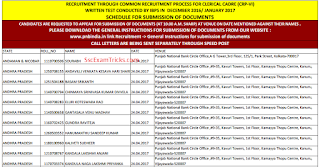 IBPS Clerk VI Appointment List 2017
Document required for Joining
IBPS Clerk apply online option was available from 22.08.2016 to 12.09.2016. The IBPS Clerk last date for payment of application fee was also 12.09.2016. Huge numbers of well qualified and eligible candidates had filled IBPS Clerk online application. However, the recruitment of IBPS clerk exam 2015-16 has been completed in few days ago. IBPS Clerk exam date has been announced by the board and it is going to be organized on the various dates in November, December 2016 and January 2017.

IBPS clerk exam pattern includes three sections namely English Language, Numerical Ability and Reasoning Ability will be comprised of 100 questions of 100 marks. The time duration would be 1 hours. This pre exam will be held for qualify purpose only and final merit list will be prepared solely on the basis of marks obtained in Main exam.  IBPS clerk exam result for preliminary examination will be declared in December 2016. The exact date will be communicated very soon. Note it down that IBPS will upload scorecard or marks obtained in preliminary exam with IBPS Clerk result 2016.
The minimum cut off marks will be set and announced by the selection board to shortlist candidates for main exam. About three times more than advertised posts the candidates will be called for main exam.

The IBPS Clerk online test for main exam has planned to be organized on two days i.e. 31.12.2016 and 01.01.2017. It is advised to the candidates that they should attend mock test for IBPS Clerk test.
IBPS Clerk Syllabus for main exam is discussed as follows:

However, no result date is mentioned by the selection board for main exam but it is assumed that IBPS Clerk Main result will be declared in February 2016.
Result Status - Declared Now
Previously IBPS clerk recruitment had been announced and online form was available in August / November 2016. The IBPS Clerical exam date was announced in notification with syllabus and exam pattern for final selection of the candidates.  After the announcement of 7th pay commission and various other declaration made by the ministers regarding the application of it, bank clerk salary has become first choice of the candidates. This can be achieved by IBPS clerk salary through qualifying preliminary and main exams.
IBPS Clerk previous papers can be downloaded through reading answer keys provided on various reputed website. IBPS Clerk mock test and model paper will also help candidates to understand the way of communication in the preliminary and main exam.